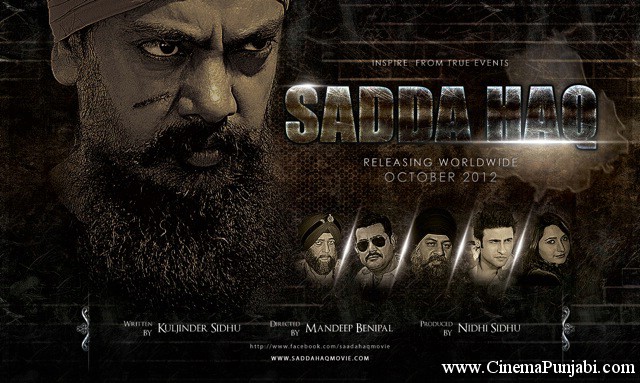 Amritsar, Punjab: The writer, producer and actor of the movie Sadda Haq, Kuljinder Singh Sidhu, has knocked the door of the SGPC alleging that the Censor Board of Film Certification has served a raw deal in terming some dialogues of the film as “objectionable”. Following this, the SGPC on Monday formed a three-member committee to see the film on December 3 and submit a report.

According to Sidhu, among the content highlighted as “Objectionable” by the Censor Board, is the main character saying “Raj Karega Khalsa” and another dialogue based on Guru Gobind Singh’s famous tenet where he advocates the use of weapons when all peaceful means of redressing a wrong stand fails.

Sidhu added that the Censor Board has objected on a dialogue where a character says — “Sikh religion is yet not considered and respected as independent religion and hence is treated as part of other religion”.
“The board has raised objections on 20 scenes and dialogues and placed a blanket ban on its release saying it is not fit for release,” Sidhu said.

The film, which according to Sidhu is based on “militancy period” in Punjab, was slated to be released on October 26. “The film was shown to the Censor Board on October 16 and 25. They decided to forward the same to review committee, which saw the film on November 14 and 21. The board conveyed its objections on 20 scenes and dialogues putting a blanket ban on its release,” Sidhu said.