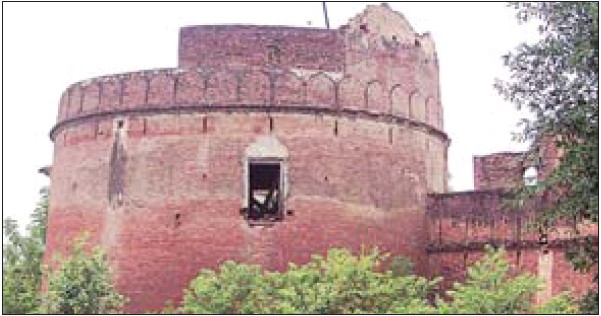 Comments Off on Sher-e-punjab’s birthplace continues to lie in ruins 1,171 Views

Despite lofty promises made by successive state governments over decades, the haveli at village Badrukhan, where the Sher-e-Punjab was born, remains as neglected as ever.

Raj Kaur, mother of Ranjit Singh, belonged to village Badrukhan, and was married to Maha Singh of Gujjranwala (now in Pakistan) in 1774. She gave birth to Ranjit on November 13, 1776 in this haveli (some historians dispute the year of his birth).

The haveli, 8 km from Sangrur, is in the possession of Bharat Inder Singh of Delhi. Its old guard said the members of this family were descendants of the Maharaja and came here occasionally. “Sardar ne manha kiya hai andar janese (the owner has restricted entry into the building). Andar Kuchh na hai sab khandar hai (there’s nothing inside, everything is in ruins),” said Ramu, the guard.

Apart from the new rooms built by the owners and the facade, the entire building is a mess. The entrance has lost its sheen, the carvings have faded and a portion of the building that held the room of the Maharaja’s mother, has collapsed. The arches and jharokhas though still stand as a testimony to the imposing architecture of the historical haveli. The room where the Maharaja was born, on the left side of the haveli, is no longer accessible, for safety reasons.

Bachan Bedil, Punjabi lyricist from Badrukhan village and author of many books on the Maharaja, said it was a shame the way the heritage place had been kept. “The government should take possession of this building and restore it,” he said, “convert it into a museum. When crores of rupees are being spent on ceremonies to remember the great king, why can’t some part be spent on restoring his birthplace ? It isn’t even a protected monument.”

On all his three visits to the village between 1997 and 2007, chief minister Parkash Singh Badal had promised to install a statue of the Maharaja, and build a medical college, model school, park and gymnasium here. Last year, deputy CM Sukhbir Singh Badal promised to fulfill the promises.

“Asking Pakistan’s government to conserve the Maharaja’s ancestral house there is fine. But what about saving Badrukhan haveli,” asked the lyricist.

In 1968 the-then chief minister, Lachhman Singh Gill, announced setting up a museum here on the name of the Maharaja. In 2001, Shiromani Gurdwara Prabandhak Committee (SGPC) president Avtar Singh Makkar promised a girls’ school to the village. “All talk and no action,” said villager Kuljit Singh Toor. Minister for archives Sarwan Singh Phillaur said, “Thanks for reminding.”