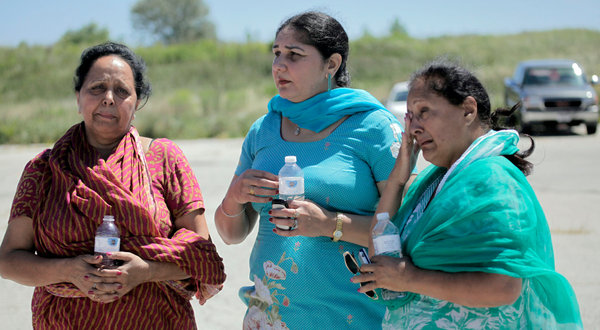 Wisconsin, US: A shooter took the lives of six people at a Sikh temple near Milwaukee before being killed by a police officer, in what the FBI said may have been an act of “domestic terrorism.”

The suspect hasn’t been identified. The gunman was described as about six feet tall, light skinned, bald, and with a “9-11” tattoo. He appeared to target men wearing turbans as he moved through the temple and fired without speaking, Kanwardeep Singh Kaleka, a temple member, told CNN.

“In my view, it’s a hate crime,” Kaleka said. “Obviously this man had no regard for human life.”

The killing in Oak Creek, about 12 miles (19 kilometers) south of Milwaukee, was the second mass shooting in the U.S. in less than a month, and followed a request by more than 90 members of Congress for the FBI to monitor hate crimes directed at Sikh adherents. The lawmakers cited a “growing concern” in the April 19 letter to Attorney General Eric Holder and FBI Director Robert Mueller. Men who follow the Sikh faith, which originated in South Asia, often wear beards and turbans.

“Numerous reports have documented how those practicing the Sikh religion are often targeted for hate violence because of their religiously-mandated turbans — i.e. because of their Sikh identity, regardless of whether the attacker understands the victim to be Sikh or not,” the said lawmakers, led by U.S. Representative Joseph Crowley, a New York Democrat.

“Sikh-Americans are too often the victims of intolerance and hate,” Crowley said today in a statement. “We all grieve for those lost in this tragic event.”

The Federal Bureau of Investigation has taken over the investigation, John Edwards, chief of the Oak Creek Police Department, said in a televised briefing.

“While the FBI is investigating whether this matter might be an act of domestic terrorism, no motive has been determined at this time,” Teresa Carlson, the Special Agent in Charge of the FBI’s Milwaukee office, said in a prepared statement.

Authorities searched a home in nearby Cudahy, roping off four blocks in a residential neighborhood, the Associated Press said. Cudahy police referred questions about the activity to the FBI in Milwaukee.

Four of the dead were found inside the temple and three outside, including the shooter, police said.

The shooter “went into the holy room and opened fire on some of the individuals there,” Kaleka told CNN. “Most of the people I’ve heard have been shot or killed were all turbaned men.”

Three injured men, including the police officer, and the seven dead were taken to Froedtert Hospital in Milwaukee, the Associated Press said. The Milwaukee Journal Sentinel reported that among those shot was Satwant Kaleka, the temple president.

The three wounded men remained in critical condition at Froedtert Hospital as of 8:30 p.m., Lee Biblo, the chief medical officer, said in a statement. Two had surgery and one was still “undergoing a complex procedure,” according to the statement.

One was wounded in the abdomen and chest, another in the extremities and face, and the third in the neck, according to the statement. It didn’t specify the police officer’s injuries.

The shooting prompted authorities to tighten security around Sikh temples in New York as a “precaution,” according to a statement from the city. The AP reported similar steps were taken in Chicago.

Started 500 years ago, Sikhism has about 27 million adherents, mostly in India, according to the AP. It said estimates put the number of Sikhs in the U.S. at about 500,000.

The Sikh Temple of Wisconsin purchased land in Oak Creek for a larger temple that was set for completion in April 2007, according to the temple’s website. The first temple was established in Milwaukee.

President Barack Obama said he and First Lady Michelle Obama were “deeply saddened” by the shooting and pledged support for the investigation.

“Our hearts go out to the families and friends of those who were killed and wounded,” Obama said in a prepared statement. “As we mourn this loss which took place at a house of worship, we are reminded how much our country has been enriched by Sikhs, who are a part of our broader American family.”

Obama spoke by telephone with Charanjeet Singh, a trustee of the Sikh Temple, as well as Wisconsin Governor Scott Walker, a Republican, and Oak Creek Mayor Steve Scaffidi, the AP reported.

Mitt Romney, the probable Republican nominee for the presidency, also deplored the shooting.

“This was a senseless act of violence and a tragedy that should never befall any house of worship,” Romney said in a statement, according to the AP. “Our hearts are with the victims, their families, and the entire Oak Creek Sikh community.”

Less than a month earlier near Denver, a masked gunman opened fire at a midnight showing of “The Dark Knight Rises” in suburban Aurora theater, killing 12 and injuring 58. James Holmes, a former graduate student in neuroscience at the University of Colorado in Denver, faces multiple murder charges.

That was the deadliest shooting in Colorado since the Columbine High School massacre in April 1999, and the worst mass shooting in the U.S. since November 2009, when 13 people were killed at Fort Hood, Texas.