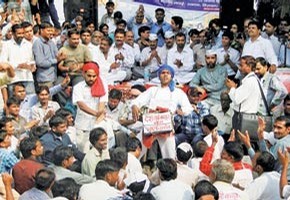 Comments Off on Seeking Justice: 28 years after riots, photographs send a reminder 326 Views

New Delhi: An exhibition, called “Justice Campaign for the Forgotten Citizens of the 1984 Sikh Genocide”, showcased photographs, paintings and statements by survivors at the Delhi University on Monday morning and Geeta Colony in the evening.

There were pictures of burning homes and charred bodies, black-and-white testaments to the suffering of those caught in the massacre.

Many people were killed in the anti-Sikh riots between November 1 and 4, 1984. Official records say 2,733 unclaimed bodies were cremated by the government. The survivors say the number of actual deaths was much more.

The travelling exhibition was inaugurated on October 20 at Jallianwala Bagh in Amritsar. It came to Delhi on Friday, via Sultanpur, Jalandhar and Ludhiana.

The exhibition will be displayed at Chotte Sahibzade Gurdwara on Jail Road on Tuesday, and will travel to Ranjit Nagar Gurdwara. It will be taken to Bangla Sahib Gurdwara on Thursday.

The campaign also includes a petition which asks the government to ensure proper investigation and legal action against the perpetrators of the carnage and to create fast-track courts for these cases. The petition also asks for a strict law to deal with communal and sectarian violence.

Looking at the pictures on display, 66-year-old Dhanwant Singh recalls how he escaped the mob while they burnt his factory in Geeta Colony. “There were outsiders who came in to loot and burn. Everyone knows who was there but nothing has been done by the government,” he says.

Satwant Kaur (47), then a resident of Gokulpuri near Loni Road, talks of a Hindu neighbour, who “lay down on the ground and begged” the mob to spare her brother’s life, claiming that the 14-year-old boy was her son.