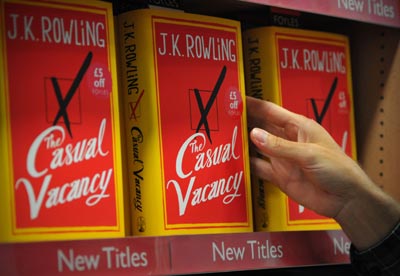 Fans of Rowling snapped up copies of “The Casual Vacancy” when the book went on sale, although there was none of the hysteria that accompanied each launch of a new title about the boy wizard.

Several reviewers said the eagerly awaited work was a dull read in parts despite scenes of sex and drugs, and Rowling’s most vivid writing was on the familiar ground of children pitted against the power of adults.

“I had just read a passage written by the world’s favourite children’s author in which a teenager is raped by her mother’s heroin dealer, a man who may well be the father of the girl’s own three-year-old stepbrother, although it’s hard to know for sure when the mum concerned is a prostitute,” wrote Allison Pearson in the Daily Telegraph.

She said the novel was “sometimes funny, often startlingly well observed, and full of cruelty and despair”.

But the Mirror tabloid labelled it “Harry Potter and the Goblet of Filth”, warning that Rowling was “sure to face stern criticism” for its liberal use of obscene language.

Set in the fictional village of Pagford in southwest England, the black comedy deals with the fight to fill a slot on the parish council after the incumbent’s sudden death, and hinges on the fate of a squalid housing estate.

Kept closely under wraps until publication, it is widely expected to be Britain’s top-selling fiction title this year.

“I genuinely think that it’s a humorous book. It’s life in a small town,” Rowling told fans at an event in a London theatre Thursday night to mark the launch.

“It’s a realistic view of what that kind of community is like.”

Rowling added that she was “drawn by spirituality and faith” and had researched Sikhism to create a family of Sikh characters who figure prominently in “The Casual Vacancy”, having used “Christian imagery” in the Potter novels.

Danielle Salvatore, 19, a student from North Carolina, had paid £200 for a resold ticket to the event.

“It’s worth it because JK Rowling inspired a lifetime of magic for me,” she said.

Despite scepticism from some reviewers, others hailed Rowling’s foray into books for adults.

In the Independent, Boyd Tonkin called it a “song of freedom” after Rowling’s seven books about the boy wizard, which by some estimates made her the world’s first billionaire author.

“Comparing it with other JK Rowling novels is difficult,” she told AFP. “But even if we are far from Potter’s universe, it’s still from her pen.”

Rowling, 47, has said she left “the door ajar” for a return to the world of Harry Potter, although she said she was not intending to write any more books about the young wizard.

“There’s only one reason to write now: for me,” she told the BBC.

She admitted it was “murder” saying goodbye to her most famous character.

“But truly, where Harry’s story is concerned, I’m done. I just think it would be for the sake of milking it and that’s just not in me.

“Now, having said all of that, I have always left the door ajar because I’m not that cruel. If I had a fabulous idea that came out of that world, because I loved writing it, I would do it.”