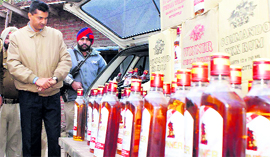 Chandigarh, Punjab: Living up to its notoriety of being a Bacchus-loving state where election time is synonymous with free flow of alcohol, poll-bound Punjab has brought true the worst fears of the Election Commission (EC) that liquor would flow freely here.

During the 34 days of surveillance, various teams have confiscated 5.12 lakh bottles of country made liquor, 1.6 crore ml of illicit liquor and 1.6 lakh kg of illegally brewed liquor (lahan) from across the state.

Chief Election Commissioner SY Qureishi had expressed worry over the use of liquor and drugs to woo voters in Punjab. He had issued directions to ensure that liquor is not allowed to be distributed at any cost.

“We have recovered so much of liquor in the state during these days. We are going to step up the vigil even more now,” said Usha Sharma, Special CEO, Punjab.

She had received information that candidates were storing the quota to be used on the poll eve which was being transported in trucks at night. Police chiefs of certain districts had also reported the matter to the CEO.

A. Venu Prashad, Commissioner, Central Excise, said even they were surprised at the huge recovery of liquor during the last one month. “It seems most of the liquor recovered was related to elections,” he said.

Allaying the fears of certain EC officials that there was a possibility of liquor making way into poll-bound Uttar Pradesh from Punjab, Prashad said there seemed to be no connection. He said the liquor was more expensive in Punjab, the transportation was regulated and Haryana was closer to UP than Punjab. “So, it is certain that all this liquor was meant for our own state only,” he said.

A few days ago, the police had registered an FIR against SAD candidate from Bholath, Bibi Jagir Kaur after 183 cases of liquor were seized from her truck. A case under various sections of the IPC and the Representation of Peoples Act, 1951.

The 1.6 crore ml of Indian Made Foreign Liquor, 1.6 lakh kg of illegally brewed liquor (lahan) and 5.12 lakh bottles roughly sums up to 6.9 lakh bottles of liquor for over 93 lakh registered male voters. Despite the surveillance there are many ways to hoodwink the authorities, say sources. As many as 72,000 cases of liquor are driven out by 180 trucks out of 30 distilleries across the state everyday.