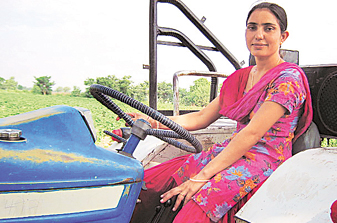 Made of steel, her love is a tractor

Comments Off on Made of steel, her love is a tractor 1,283 Views

Malout, Punjab: She is a rural woman with a drive to do the hardest jobs a man can find. Contrary to the image of a traditional village housewife tied to children and chores, Charanjeet Kaur of Dhipan Wali, 30 kilometers from this town in Muktsar district, is a tough nut who ploughs, harvests, and also sells the crop-all driving her faithful tractor-strengths that made her a “driving freak” and one of the most fearsome raiders on the national kabaddi circuit.

She drove her first tractor at eight. “It was an Eicher,” she recalled. “It fascinated me since I was a toddler. In the beginning, my feet would not even reach the brakes, so I would drive standing.” And how has that love served her? “At seven, I lost my father,” she said. “I was the eldest of three siblings (she has two brothers), the family was in shock, and my uncle in depression because he had lost his farming companion. I converted my passion into the means to support my family.”

Her uncle, who didn’t have a child, brought her up like a son, and taught her to be strong. “He would take me into fields, where I would try to manoeuvre the tractor,” said Charanjeet Kaur. “Our tractor driver, Harjit Singh, taught me the basics of controlling it. My uncle and I together did a lot of farming on our 18 acres. We would plough the field, put spray on the crop, and stay on the farm overnight for irrigation.”

Two decades ago, tractors did not have automatic ignition. “We had to wind it to make it start, just like a generator,” she said. “A driving freak, I have driven nearly all vehicles, from an rickshaw to a truck. I go for a long drives in my car.” “Is the experience any different?” we asked her. “Tractor has strong handle and requires more muscle to steer.”

In today’s time, she wants families to teach girls all tasks that boys only are supposed to do. “Girls have to be strong physically and mentally to face the odds,” she said. Three months ago, Charanjeet Kaur married into Kand Wala village near Dhipan Wali. “Earlier, I helped my uncle, and now I help my husband,” she said. “We have been married only a few months, but I go with him to work in field.” Charanjeet is also a national-level kabaddi player. “I was a raider,” she said. “The team called me ‘bhau’ because I had tomboy looks. My sturdy image always unnerved the opponents, thanks to the first lessons in toughness.”