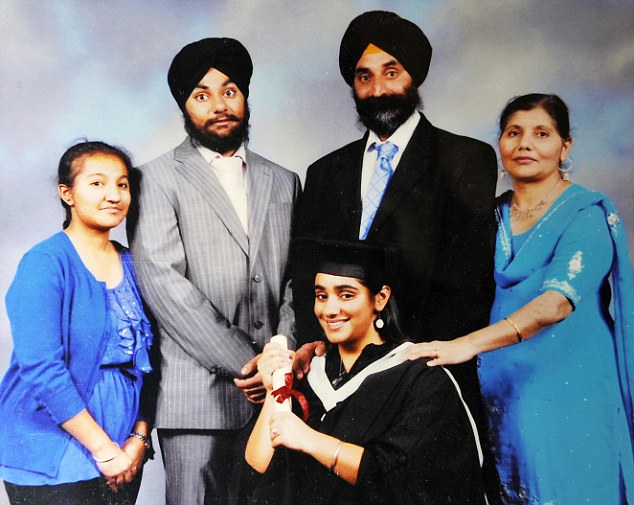 Look, no bearskin! Sikh Guardsman allowed to wear turban at the Palace

Comments Off on Look, no bearskin! Sikh Guardsman allowed to wear turban at the Palace 634 Views

London,UK: This is the first picture of Buckingham Palace Guardsman Jatinderpal Singh Bhullar wearing his ceremonial uniform – minus a traditional bearskin.

Scots Guardsman Bhullar will this week break centuries of tradition when he wears a turban adorned with a regimental cap badge on parade outside the Palace.

Last week, The Mail on Sunday revealed how Guardsman Bhullar had suffered abuse over his Sikh religion and turban from comrades, and now a Facebook tribute page has been set up in his honour. Titled ‘Guardsman Jatinderpal Singh Bhullar: A credit to the nation’, it features pictures of Jatinderpal, along with tributes from friends, relatives and members of the public who support him.

An entry from Guardsman Bhullar himself reads: ‘I am very grateful for whoever set up this page, and may God be with u and every1 else who is liking this page and supporting me.’

Our picture of Bhullar in his turban, red tunic and white buff belt was taken at Wellington Barracks in London’s Birdcage Walk, where he is based with colleagues from his regiment’s ceremonial company,  known as F Company.

The buttons on Bhullar’s tunic are positioned in threes to represent the Scots Guards’ status as the third regiment in the Guards Division’s order of seniority.

Bhullar’s success in breaking with tradition is considered essential to the regiment’s future, given the changing demographical picture of its recruiting heartlands. By 2018,  it is expected that 25 per cent of the population in these areas will belong to ethnic minorities.

‘The regiment will cease to exist unless it can tap into this resource of potential soldiers in western Scotland and northern England,’ said a source.

‘The Scots Guards must welcome Bhullar and hope his success will encourage other Sikhs and more Muslims to enlist.

‘Bhullar is a hard-working soldier and has won a lot of respect. Nobody pretends this is an easy process for him and there are those who object on traditional grounds to him wearing a turban rather than a bearskin.

‘For them, it is regiment first and religion second and they cannot see beyond that.

‘Bhullar is expected on parade in a black turban adorned with a Scots Guards regimental cap badge early this week. Everyone at Wellington Barracks wishes him all the best.’

Bhullar’s family is delighted. His mother Gurbax kaur Bhullar, 48, from Slough, Berkshire, said: ‘Jatinderpal called round last Monday to show us some Army photos. My husband Surinderpal was thrilled and said he thought his son looked very striking in his uniform, holding a gun and wearing white gloves.

‘Jatinderpal wanted to join the Army because his grandfather had served in the First World War. We had family pictures of him in his uniform and Jatinderpal would love looking at them.

‘It was a great passion of Jatinderpal’s from a very young age, and he would say when he grew up he wanted to be in the Army and make his country proud of him.

‘We are very proud of him. He  kept himself fit with boxing, weightlifting and going to the gym and  was always on a strict diet. He is very strong.’

A Ministry of Defence spokeswoman said: ‘The Army takes great pride in its diversity and it is its long-term aim to be manned by personnel from all of the UK’s diverse communities. There are a number of Sikhs already in the Army who wear turbans when in uniform.’

2012-12-09
Guest Writer
Previous: Turbaned Sikhs Are Not Terrorists
Next: Sikh Youth Vancouver Say They Are Staying Out Of Surrey Guru Nanak Elections