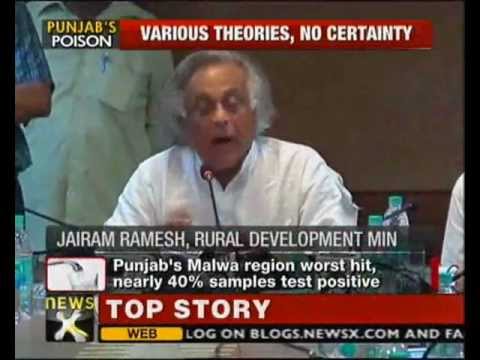 Chandigarh, Punjab: The high incidence of cancer and other diseases in Punjab’s Malwa belt has been highlighted over the last decade. Now, union Rural Development Minister Jairam Ramesh has confirmed the presence of uranium and other heavy metals in groundwater in the state, particularly the Malwa region, and serious efforts are afoot to control the damage.

The worst affected is southwest Punjab’s fertile Malwa belt – the area south of the river Sutlej – comprising the districts of Mansa, Bathinda, Moga, Faridkot, Barnala, Sangrur and some parts of Ludhiana.

Ramesh, during a visit here last week, admitted that substantial quantities of uranium, arsenic, mercury and other heavy metals had been found in the tested samples of groundwater in Punjab.

“The level of uranium in the ground water is 50 percent over the WHO norms. The source of this is not yet known. Punjab is the only state to have uranium in its water,” Ramesh said here.

Of the 2,462 samples of water collected from tubewells across Punjab, 1,140 samples had tested positive for the presence of uranium and arsenic.

The effect of all this can be seen in the growing number of patients in the Malwa belt with cancer and other diseases and children being born with abnormalities. In fact, a train that connects Bathinda with Bikaner in neighbouring Rajasthan is known as the ‘Cancer Express’ as it ferries a large number of cancer patients from Punjab to Bikaner for treatment at a cancer hospital.

The union government, which has promised to give Punjab Rs.525 crore to make its water uranium free, has already sanctioned a water testing laboratory at Mohali, 10 km from here.

Environmentalists blame the rampant use of pesticides, fertiliser and other chemicals – as Punjab took the lead in the Green Revolution and became the country’s No. 1 state in food grain production – for the contaminated groundwater.

According to Umendra Dutt, director of the Kheti Virasat Mission, an NGO that works for agriculture and environment causes, an immediate plan is needed to tackle the multiple environmental toxicity in Punjab’s water.

“The rampant use of pesticides and agro-chemicals to achieve the green revolution is responsible for this situation,” Dutt said.

Some other environmentalists blame the pollution and waste from thermal plants and explosives used in past wars for the contamination of the water.

The Punjab government has sought technical help from the Bhabha Atomic Research Centre (BARC) to tackle the growing problem of uranium in groundwater.

Deputy Chief Minister Sukhbir Singh Badal has said the Punjab government would launch a war against uranium pollution in water, which was only specific to Punjab.

Scores of people in Bathinda, Mansa, Sangrur and other districts have died or are suffering from cancer and other diseases owing to uranium contamination.

Badal said that Chief Minister Parkash Singh Badal had already requested Prime Minister Manmohan Singh to allocate a special budget to tackle the problem of uranium as it has been done in the case of arsenic and fluoride contamination.

He said the BARC team was trying to locate the source of uranium contamination and the Punjab government was taking all possible measures to provide a reverse osmosis (RO) system for the supply of safe drinking water in the affected areas.

2012-07-13
SSNews
Previous: Award for villages with single gurdwara, Akal Takht
Next: Punjab : the birth of the uranium anomaly