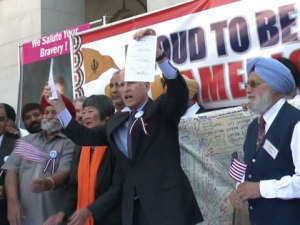 California employers face new restrictions against shunting Sikh and Muslim workers to backroom jobs out of public view based on their wearing of turbans, beards and hijabs, under a law signed Saturday by Gov. Jerry Brown.

“This bill, AB 1964, makes it very clear that wearing any type of religious clothing or hairstyle, particularly such as Sikhs do, that that  is protected by law and nobody can discriminate against you because of that,” Brown told some 400 Sikhs and supporters at a rally of the North American Punjabi Assn. on the steps of the Capitol.

Brown also signed SB 1540, which requires the state Board of Education to consider a new history framework for schools that the governor said will include “the role and contributions of the Sikh community in California.”

A series of court cases have muddied the water on what employers must do to accommodate the religious practices of workers, and the new state law clarifies the requirements, said Rajdeep Singh, director of law and policy for the Sikh Coalition. The new law does not guarantee a positive outcome  for workers but requires employers to meet a higher standard of objectively showing how religious accommodation would be a significant hardship,  Singh said.

“It’s needed because Sikhs and other religious minorities continue to experience job discrimination on account of their religion,” Singh said.

The new law restricts employers from segregating an employee from customers and the public as a means of accommodating the employee’s religious beliefs. It clarifies that employers must accommodate a worker’s religious practices unless it creates “significant difficulty or expense” for the employer. It also specifies that religious dress and grooming qualify as protected religious observances, according to Assemblywoman Mariko Yamada (D-Davis), who wrote the bill.

“This to me is like the Rosa Parks issue of the 21st century,” Yamada added.  “An employee should not have to work in the back of the store in order to observe his or her faith.”

Another  legislation updates the California high school curriculum so that every student in the state learns about the about the history, tradition and theology of Sikhism and California Sikhs.