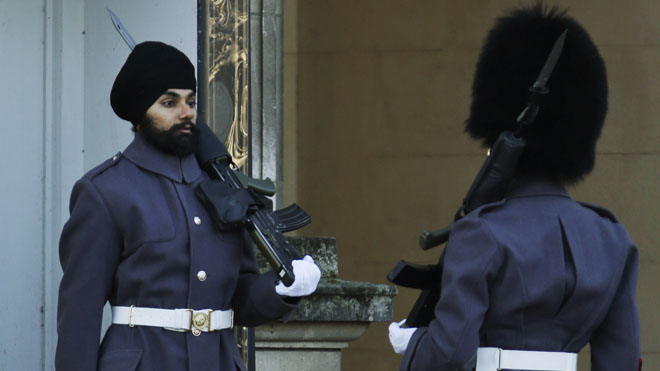 In a first for Britain, Sikh soldiers wears turban during Buckingham Palace ceremony

Comments Off on In a first for Britain, Sikh soldiers wears turban during Buckingham Palace ceremony 396 Views

London: – Britain’s Ministry of Defense says a Sikh soldier has become the first guardsman to parade outside Buckingham Palace while wearing his traditional turban.

Fifty family members were on hand Tuesday as Guardsman Jatinderpal Singh Bhullar as he took part in the changing of the guard at the London home of Queen Elizabeth II.

Bhullar, a 25-year-old soldier with the Scots Guards regiment, was quoted by Britain’s Press Association as saying: “Conducting public duties while being a practicing Sikh and wearing my turban is a great honor for me.”

Other Sikhs have taken part in guarding the queen’s palace, but they wore traditional bearskin hats rather than turbans.

2012-12-13
Guest Writer
Previous: Looking back in anger: Seeking justice for decades
Next: First sikh to undertake expedition to South Pole