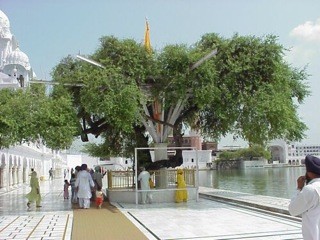 Amritsar,Punjab: For the first time, scientists have removed the layers of concrete and marble from around the stem of historical Dukh Bhanjan Ber (Jujube tree) that stands on the banks of holy sarovar (lake) in Golden Temple.

The concrete structure had hampered the growth of plant, resulting in dried leaves and wilting stem.

Manager, Golden Temple, H S Malhi, told TOI on Tuesday that drying of leaves of the most-revered tree was worrisome. As such, they had sought the help of scientists to take preventive measures to avoid further damage to the tree.

According to legend, a leper was miraculously cured by taking a dip in the sarovar near the ber tree and when 4th Sikh master, Guru Ram Das, who had excavated the pond, came to know about the miracle, he named it Dukh Bhanjan (eradicator of sufferings) Ber. There are three historical Bers in Golden Temple — Ber Baba Budha Sahib, Lachhi Ber and Dukh Bhanjan Ber.

Dr Narinder Singh of Punjab Agriculture University said that due to laying of successive layers of concrete, brick and marble around the stem of ber tree, it had weakened and damaged the root zone.

The cement structure around the stem had caused considerable damage the root zone as well as stem of Dukh Bhanjan Ber, he said, adding that it should be at the earth level.

He informed that he had got all the cement structures, including marble, removed from around the stem and filled it with soil, which would strengthen the root zone as well as stem. He also advised that devotees should avoid touching the ber trees with ghee-smudged hands and should also not put flowers or garlands since they attract insects during decomposition, which causes further damage to the plant.

Malhi said that they would erect a glass wall around the stem to prevent devotees from touching the plant and placing flowers, garlands, etc.