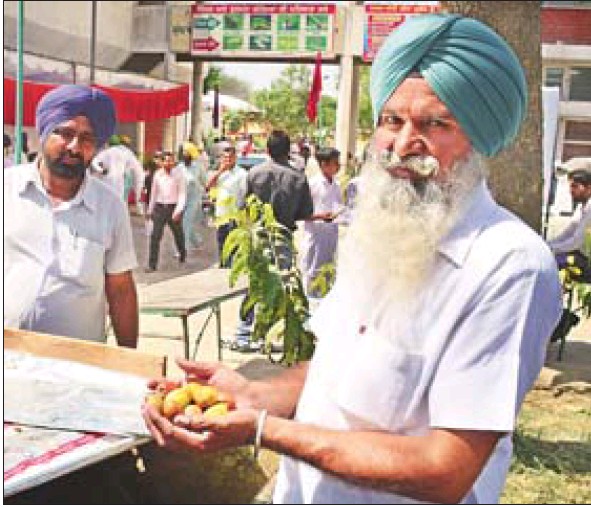 Give this farmer seed, he’ll turn it into money

Bathinda, Punjab: He cast a spell on farmers on Friday by just talking common sense. In the times of growing unprofitablity of agriculture, his success is magical.

At the agricultual fair on the Punjab agriculture department grounds in Bathinda, farmers from many villages listened in rapt attention to Gurcharan Singh speaking about the economic benefits and techniques of manging the “manufacturing to marketing” cycle.

The wise farmer from Bathinda’s Tungawali village was critical of cultivators in the region for their “bashful step” of marketing their products themselves. There were speeches by even eminent scientists and politicians but he made the biggest impression.

He educated other farmers about adding variety to agriculture. “I own 20 acres. I will gain even if my farm is on lease,” said Gurcharan. “I earn more than R60,000 a year from jujube (berry) fruit alone on each acre against my expenditure of R10,000 on each acre.

The jujube tree takes four years to generate fruit but it can grow in barren land. The fruit season is from February to mid- April.”

Besides, he grows fodder and trees, making R8,000 a day from fodder and R1,000 a day from excessive straw, leaves, and stems from trees. The horticulture department gives him subsidy on this. “If farmers want to get rid of losses, they have to sell honey, fruits, and milk,” said Gurcharan Singh.

“Bee farming i s another alternative source of my income,” he said. “Each beebox gives me R2,000 a year. I keep bee boxes till October, and from November to February, I send these to Rajasthan for bees to feed on flowers there.”

Gurcharan Singh learnt the method from the Punjab Agricultural University regional centre in Bathinda, and won awards for it from both the state and the Centre.

2012-04-09
SSNews
Previous: Story of four siblings
Next: The Development of Sikh Tribes in India