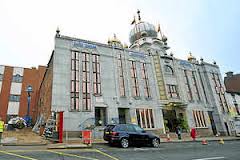 UK: These are the first images of the inside of the completed £5 million extension to a Sikh temple, which is due to open tomorrow.

The centre in Smethwick will serve the community, catering for everything from banquets to wedding receptions and has several classrooms, meeting rooms, a library, an 80-seat lecture theatre and a bistro-style cafe.

The extension to one of the oldest Sikh temples in the country has been built on the site of the former Princes Cinema and is around 40,000 sq ft in size. Construction firm chiefs handed back the keys of the Guru Nanak Gurdwara to temple leaders at a special ceremony, after completing the development in just 18 months.

The annexe, which took almost 10 years to plan, fund raise for and construct, has a modern LED lighting system which is sensor-controlled. The construction workers have also fitted a 25,000 litre tank to collect rainwater for flushing toilets. The building has an under-floor heating system on the ground floor and a fully computerised building management system which will ensure that all services can be monitored and operated in the most energy efficient way.

On the ground floor of the annexe there is a large modern kitchen and a spacious dining hall, which has a capacity for 500 people.

A large full-height glass atrium foyer area has also been built to connect it to the existing Gurdwara building. This is just the first phase of the work at the temple, and details of the second phase will be confirmed at a later date, but are expected to include a new frontage to the building.

Joginder Singh Bahia, chairman of the trustees of Guru Nanak Gurdwara said: “I am so pleased that the community annexe has been completed and will now be available for the community to use.”

Tejinder Kaur Mann, treasurer of Guru Nanak Gurdwar, said: “This is a landmark building for Smethwick and for the Sikh community.”

The extension will be opened to the public on Friday.

Previous: Kartarpur Sahib in Pakistan is like Medina for Sikhs
Next: Hindus and Sikhs in Pakistan enjoy freedom: Pakistan Sikh Council