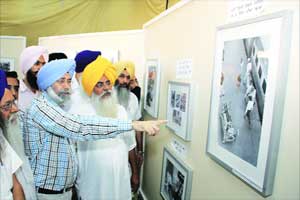 Ludhiana,panjab: To demand justice for the victims of 1984 Sikh Genocide, senior advocate H S Phoolka was in Ludhiana on Friday with his exhibition on the riots.

Earlier, the exhibition, which included pictures clicked by photo journalists, had been held in Jallianwala Bagh, Sultanpur Lodhi and Jalandhar.

While one picture showed President’s escort being badly injured because he was a Sikh, another picture showed 26 widows of one family, half-burnt bodies and dogs eating human flesh.

Phoolka said, “From tomorrow onwards, this exhibition will be in Delhi till November 3. We will be giving a petition to Prime Minister Manmohan Singh on November 3 seeking justice for the riot victims. Though in Gujarat riots, punishment has been awarded to the culprits, it is not in the case of 1984 Sikh Genocide where killings were 10 times more than that in Gujarat. The exhibition was organised to make people realise that justice has not yet been done.”

The petition has been written by former Supreme Court Judge Justice Krishna Iyer in which he has demanded strict punishment for the culprits.