The proposed Derby Sikh Academy would be built on to the existing Sunday Punjabi school, which attracts up to 200 pupils, at the Singh Sabha Gurdwara temple, in Princes Street.

The new school, serving a Sikh population of 8,000, would be one of three similar free schools in the country if it goes ahead and opens in September 2014.

Half of its pupils would be Sikh and the other half from different religious and cultural backgrounds.

Around 50 people gathered at a consultation meeting last night at Pear Tree Library, in Pear Tree Road, to discuss the plans.

It followed a first consultation meeting at Sinfin Library on Monday.

Jatinder Kaur Bains, 56, of Littleover, said she hoped the school would be built so she could send her granddaughter, who is eighteen months old.

She said: “I would like her to go to it. She will be able to learn about different cultures and languages including Punjabi as well as learn Indian instruments.”

And Balraj Sanghera, from Sinfin, said: “This is a really good step for the area.

If we have a really good school which makes great progress then I hope it can be compared to grammar schools.

We want our children to have an excellent education to be able to take them far in the future.”

Dr Daljit Singh Virk, head of education at the temple and a senior research fellow at Bangor University, said Derby would benefit from the school.

We need their opinions so we can prove to the Department of Education that there is demand for it.”

At the meeting, a presentation was given as well as an opportunity for people to ask questions on the plans.

Navjot Kaur, health visitor and practice lecturer at the University of Derby, who led the presentation, said: “There is a need for the free school as existing schools in the area are struggling due to multiple needs of the students.

The schools in the area are oversubscribed and there is currently a high level of deprivation. We are promoting a value-based education which will teach honesty, respect and equality.”

Harpinder Singh Kang, of Sunny Hill, described plans for the school as a “double opportunity”.

He said: “It will provide an opportunity to learn about faith and education. I think it’s a brilliant idea and will create a very good society with morals and principle 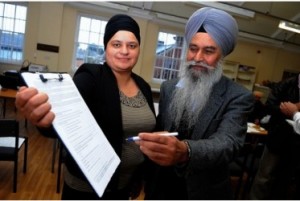