'Religion does not come into it'

Muslim and Sikh recruits training in the British Army say their faith is not an issue, but at times it can present them with a few dilemmas. Lieutenant Colonel Neil Unsworth, the chief of staff at the army’s Vimy Barracks – part of the Infantry Training Centre within Catterick Garrison – says the army is “flexible wherever it can be”.

“If I was out in Afghanistan in uniform I would be shot at right away, as the Taliban would not know who I was or my Muslim background,” says Akhtar Hussain.

The 19-year-old British Muslim from Brighton joined the Princess of Wales’ Royal Regiment seven weeks ago and is currently undergoing a 26-week training programme at Vimy Barracks in Catterick.

He says his faith does not really affect his army training, and the attitude to British Muslims at the barracks is positive.

“They cater for my needs and if I want to pray or observe Ramadan I can,” says Private Hussain.

“Getting dirty and sleeping out in the cold and rain does not bother me, I love it. I can pray out there if I want and then fall back in and carry on with my training.”

He says he is provided with Halal food inside the barracks and given Halal food in his ration packs when out on exercise.

But when Pte Hussain finishes training, he might be posted on a tour of duty in Iraq and Afghanistan – and he is aware British Muslims joining the army has become a contentious issue.

“Obviously coming from my background, it plays on my mind. I may end up in this situation but I don’t think religion comes into it, it’s more about terrorism.”

Pte Hussain says his family are proud of his decision to join the army.

“Its been a dream that I have worked so hard for. I am the eldest son in my family and my parents say what more could they ask for. Me being in the British army – they are so proud.

“All my friends are also pleased with my joining up and say how mature I have become in such a short space of time,” he adds.

Pte Hussain is part of a growing trend. According to the latest figures from the Ministry of Defence, 9.5% of a total of 106,460 soldiers are from a minority community, compared to 8% three years ago.

The number of recruits from Commonwealth countries – mainly India, Pakistan and Nepal – is also on the increase, with 244 going through the infantry training college last year. 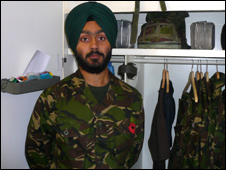 One of these is Subeg Singh, 23, a Sikh from the city of Jammu in Indian-administered Kashmir.

Rifleman Singh is about to join his regiment, 1st Battalion The Rifles, and agrees that the British army has been supportive.

“The day I arrived they asked what special requirements I had and were keen to accommodate my religious requests,” he says.

One of the special requirements was met by providing transport to pray at the nearest Gurudwara.

But he says his turban – which the British army allows Sikhs to keep – initially caused some confusion amongst other soldiers.

“The recruits in my company asked what I was wearing on my head. Once I told them, they completely understood what a turban was and why it is worn.

“On some days I also wear a cloth to cover my beard – others just want to know what it is and why it is important to me.

“I also wear my patka [lighter weight cloth covering for the head] for some physical exercise as I cannot wear a turban during a 10-mile run,” he says.

During his training on the rifle ranges, Rifleman Singh has to take off his turban for safety and wear a hard helmet.

“I have just been told that the army are going to issue Sikhs with bulletproof turbans which is great because I can then fight wearing a turban,” he says.

The British Sikh Police Association has also been campaigning for bulletproof turbans so Sikh officers can serve as firearms officers and deal with public order and still abide by religious traditions.

Lieutenant Colonel Neil Unsworth, the chief of staff at the army’s Vimy Barracks – part of the Infantry Training Centre within Catterick Garrison – says the army is “flexible wherever it can be”.

“We’ve looked at the traditional dress that British soldiers wear. The turban is not an issue, it’s in rifleman green and it matches the rest of the uniform including the regimental badge.

“Food is no longer an issue, neither is how you pray.

“The army has changed and become a very inclusive and fair place to live and work and it comes down to how good you are, not the background you come from,” he says.

Previous: BNP poppy wreath was laid among Sikh tributes at a Birmingham Remembrance ceremony
Next: Sikh councilman inspired by Obama beat the odds