Punjabi wives abandoned to a life in limbo 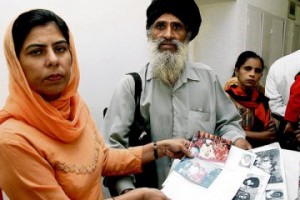 The husbands – and dowries – of some 15,000 brides have disappeared abroad, writes RAHUL BEDI in Chandigarh, north India

JASWANT KAUR is one of more than 15,000 “holiday wives” spread across India’s northern Punjab state. After years of abandonment, she still awaits her husband’s return from Britain.

A fortnight after their lavish wedding in the border district of Gurdaspur, her new husband, Karamjit Singh – considered a prize catch as he was a non-resident Indian – left for London.

He promised his 21-year-old bride, who had never left her small home town, that he would send her immigration papers within weeks to enable her to join him in Britain.

The groom and his family carried away 700,000 rupees (€10,300) in dowry and gold ornaments, which the bride’s farmer parents had raised by mortgaging their small plot of land and house.

Eleven years later, the abandoned and bitter Jaswant still waits for news from her husband, her wedding photographs a cruel and mocking joke.

His phone number proved non-existent, as did his workplace and home addresses. Karamjit had simply disappeared.

“We now learn that he already had a wife and two children in London when we were married,” says Jaswant.

“For him, I was nothing but a sexual dalliance during his brief stay in India and a source of gratification for his financial greed in the dowry he extracted, for which my parents are still paying back the usurious interest on the loan they secured. Along with them I stand disgraced socially as an abandoned bride. I have no recourse to any redress whatsoever.”

Jaswant, however, is one of the luckier ones, as she escaped harassment and physical abuse at the hands of her in-laws.

Karamjit Kaur from nearby Jalandar, 400km (250 miles) north of the federal capital New Delhi, was not as fortunate.

Her husband, Raghbir Singh, left her with his parents and returned to his job in Dubai in December 2002 after carrying away the mandatory dowry, promising to send for her once “visa formalities” were resolved.

Three months later, Karamjit’s in-laws attempted to kill her by setting her alight when her parents declared their inability to pay an additional dowry.

“They first burnt my head and then set my clothes on fire,” she says, self-consciously wearing a scarf to cover the burn marks.

“She was only 21 when they [her in-laws] did this to her, an age when life begins,” Karamjit’s mother says.

“Hers ended because her in-laws wanted a motorcycle for their son which we were unable to provide. She has no present, no future.”

Karamjit’s parents lodged a police case, but they in turn were harassed.

“All the police were interested in was making money out of our misery. They are doing nothing to investigate Raghbir Singh and his parents,” she says.

“Lust, dowry and the lure of settling abroad are responsible for the plight of thousands of these holiday wives across Punjab,” says Daljit Kaur, a lawyer and activist who works to empower Punjabi women and bring justice to the state’s forsaken wives.

Such victims, she says, have recourse neither to legal redress nor protective legislation to safeguard them from being duped and dumped by Punjabi grooms, particularly those from Britain, North America and the Gulf sheikhdoms.

Some recidivist grooms have married three or four times, managing to flee safely each time, according to Kaur.

In the majority of cases local police favour the husband’s family. In some, they take five to six years even to register a formal complaint.

Since 2002, only a fraction of the 15,000 victims have managed to lodge cases, and only after bringing extreme pressure and influence to bear on the authorities. Bribes, too, have helped.

Police officials in state capital Chandigarh privately concede that such cases are difficult, if not impossible, to investigate. The reason for this is that, once the offending groom has left the country, his extradition, in the rare event of his being found guilty, is given little priority.

There have also been instances of overseas Punjabi grooms taking their wives back and insuring them for large sums, only to have them murdered to claim the indemnity.

India’s tortuously slow and corrupt legal and police investigation structure has been viewed as a form of insurance against being caught, although since the mid-1990s a handful of convictions have been achieved under pressure from overseas authorities.

“Settling abroad is a major goal of most Punjabis,” says Dr Pramod Kumar of the Institute for Development and Communication in Chandigarh.

Rising unemployment and shrinking land holdings in Punjab’s predominantly agricultural economy has over decades fed the flood of emigration to the West.

The Punjabi diaspora, especially those in Europe and North America, followed the first wave of migrants, mainly enterprising and industrious Sikhs, after the second World War. Many of these flourished financially, and then sponsored their relatives to join them.

The appeal of the West accounts largely for parents’ keenness to marry their daughters to non-resident Punjabis, even though many are reportedly aware of the potential risk.

“They [parents] remain willing to chance it as the bride is considered an avenue to somehow get their sons overseas,” says Kaur.

But the social stigma of a forsaken wife, exacerbated if she has a child, is particularly high in Punjab’s traditionalist, male-dominated society.

Women are widely considered an economic liability as they need to be married off after payment of substantial dowries.

Once abandoned, brides become even more of a drain on their families, as social prejudices make remarriage unlikely.

“A woman who has been abandoned by her non-resident husband and returns home to her parents’ home is not welcome,” says Balwant Singh Ramoowalia, former federal social welfare minister and head of the People’s Welfare Society, which works to redress the wrongs done to Punjabi women.

In addition to the stigma suffered by abandoned wives, children from such unions often face prejudice in the school system.

“Though social awareness programmes have been launched to educate people . . . and the government lobbied to adopt more stringent laws, progress has been incremental” says Kaur.