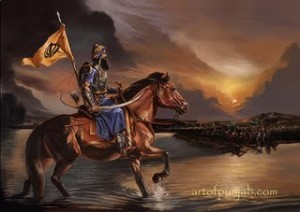 Mohali, Punjab: The most significant slice of Sikh history, the battleground where the Khalsa avenged the killing of the two younger sons of the 10th Sikh master Guru Gobind Singh, may soon be lost to a swank golf range if the recently approved master plan of Mohali is executed.

Barely 20 km away from Chandigarh, off Kharar-Landran road, lies Chhappar-Chiri village — once known for its plentiful ponds and mangroves on the banks of Patiala Ki Rao — where in 1710, the brave Banda Singh, anointed general of the Khalsa army by Guru Gobind Singh and sent to stop the tyranny of Mughals, defeated the army of Wazir Khan, the subedar of Sirhind who had ordered the killing of Sahibzada Zoravar Singh and Fateh Singh by bricking them alive. Khan was put to death and his body dragged to Sirhind, about 25 km from the village, before the Khalsa army proceeded to decimate the town.

Sikh historians are unanimous in their observation that this was the most important victory against the Mughals as it paved the way for a number of similar triumphs across several towns in Punjab. Yet, except for a simple board, bearing a history of the place, outside the local gurdwara, there are no memorials even though the place, spread across 14-15 acre of dense forests, has been visited by many VIPs, including CM Parkash Singh Badal, SGPC president Avtar Singh Makkar and his predecessor GS Tohra.

The gurdwara displays five handmade iron weapons and turban rings (chakkar) which were dug out by a farmer while installing a tubewell. ‘‘We’ve heard from our ancestors how the Khalsa forces, despite being outnumbered and ill-equipped, used the forest and guerrilla warfare tactics to defeat a far superior army,” says Zora Singh, a former sarpanch, whose ancestors’ participation in the war has been documented in books on the battle.

Previous: Khalsa school returns from ashes of arson with portables from Vancouver school district
Next: Amritsar city’s sewerage system to be revamped