Meet the first Sikh soldiers to guard the Queen 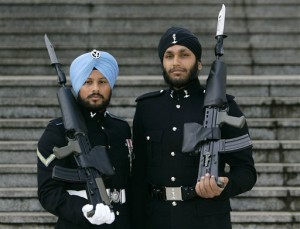 Signaler Simranjit Singh and Lance Cpl. Sarvjit Singh are the first Sikhs to take part in patrols outside the queen’s residence and to stand watch over the Crown jewels at the Tower of London across town.

Guard duties are usually carried out by the Guards of Household Division, famed for their bearskin hats and crimson coats that attract picture-taking tourists in their thousands. The ministry said the Sikh soldiers instead wore turbans and blue uniforms.

Other army regiments often help carry out guard duties at Britain’s Buckingham Palace when the Household Division is on operations. The ministry said the two soldiers are the first of the 90 Sikhs in Britain’s army to be handed the task.

“It’s purely a coincidence that this has happened now,” said a defense ministry spokeswoman, on condition of anonymity in line with policy. “Regiments take it in turn to stand in for the Household Division and it just happens that two of the soldiers this time round are Sikh.”

Sarvjit Singh, who was born in India and is a member of 3 Regiment Army Air Corps, said he was thrilled to have had the opportunity to guard the queen.

“My experience being a Sikh on the queen’s guard is beyond words,” said the 28-year-old. “It is a once in a lifetime opportunity. I feel privileged to have this honor.”

“Being in London and parading in front of hundreds of people has been brilliant. Being Sikh hasn’t made any difference,” said Simranjit Singh, 26, from Coventry in central England, who is attached to the 21 Signal Regiment (Air Support).

“It’s been hard work, but definitely worth it,” he said.

He said the toughest part of the role is keeping perfectly still when on sentry duty outside the queen’s home.

Sikhs routinely guarded Queen Victoria — a colonial ruler of India. At the time of World War I, Sikhs formed about 20 percent of the British army, but numbers dwindled following India’s independence.