Dhunda takes another U-Turn at Milpitas Sikh Temple in California

Comments Off on Dhunda takes another U-Turn at Milpitas Sikh Temple in California 2,897 Views

Bhai Dhunda was scheduled to speak at AGPC Gurudwara sahib at Milpitas,CA for five days from April 17 to 21. There were peaceful protests against him and his hosts outside Gurudwara gate as protestors were barred from entering Gurudwara sahib by the police at the direction of Gurdwara committee.

Finally, on April 20th, a meeting was arranged between Bhai Sarbjit Singh Dhundha and Panthic Singhs.

Bhai Dhundha’s arrived about three and half hours late for the meeting. While the meeting was originally scheduled to begin at 3:00 pm, it did not start till after 6:30 pm due to the delay in arrival of Bhai Dhunda. It was due to the time lost because of this delay in arrival, that several controversies raised by Bhai Dhunda and other issues could not be discussed and still remain pending. 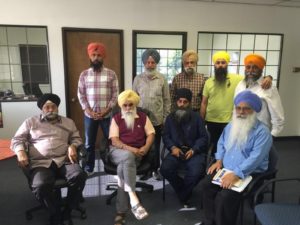 Sources have told Sikh Sangat News that one person accompanying Bhai Dhundha was attempting to disrupt the proceedings, leading to a further waste of time. He made many attempts to scuttle this meeting by raising irrelevant points. He continued to do this in spite of several warnings by moderators. It was because of the restraint exercised by the Panthic Singhs that the meeting continued. Dr. Harbhajan Singh was not allowed to speak freely (he spoke less than 10 mins in the meeting which lasted an hour) but the Sikh Sangat still kept their peace for that day and announced not to go with the protest. The meeting was adjourned when some people interrupted it, stating that Bhai Dhunda was scheduled to perform Katha in the main Darbar Hall.
Of the several issues which Bhai Dhunda has reportedly accepted the position of the Panth include:

Points that still remain to be resolved include:

Those members of the Sikh Sangat deserve to be thanked whose tireless protests against the controversial utterances of Bhai Dhunda compelled him to come to the table and accept the authenticity of three out of five Nitnem Banis as being composed by Guru Gobind Singh ji and the concept of Nam Simran as instructed by Guru Sahiban and enshrined in Sikh Rehat Maryada.
2016-04-21
SSNews
Previous: The Granth of Guru Gobind Singh USA book release
Next: Racist who vandalised Sikh Gurdwara to serve community service penalty at same Gurdwara