President of Delhi Sikh Gurdwara Management Committee, which was one among other Sikh organizations to pursue the cause of corridor, Paramjit Singh Sarna told TOI on Friday “Yes we are disappointed due to exceptional delay in taking decision on the construction of corridor. The corridor would have been constructed if the then Deputy Prime Minister LK Advani in 2003 had agreed to Pakistan’s verbal proposal on construction of corridor” he said. He resented that government had always been making claims of taking up the issue with Pakistan but never included the issue in agenda of secretary level talks.

“Disappointment is bound to be there but we can understand since the issue is between two countries and could take some time” said Jathedar of Akal Takht, Giani Gurbachan Singh. He said Center government should consider the religious feelings of Sikhs and take up the issue with Pakistan on priority. Deputy Commissioner Gurdaspur Dr. Abhinav Tirkha told that he had not received any official intimation regarding construction of corridor. 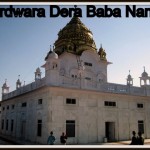 personals provide binoculars to the devotees for a clear Darshan of Gurdwara. Many Sikh devotees offer prayer from near the border fence while looking at the Gurdwara.

A local shopkeeper Bira who sell religious calendars among other things said “I have been listening about construction of corridor for more than a decade but not a brick have been placed so far”. He said, not only the aspirations of Sikhs would be fulfilled but local youth would also get employment opportunities. BS Goraya of Sangat Langha, Kartapur Sahib who has launched a campaign for the construction of corridor informed that after completing four journeys, Guru Nanak Dev, first Sikh master had reached at Kartarpur Sahib in Pakistan 1522 and lived a simple life tilling fields for nearly 17 years before leaving for heavenly abode in 1539 , later a Gurdwara was constructed here.

In 2008, the then external affairs minister Parbam Mukharjee had even announced to send a team for conducting survey to conduct the possibility of construction of four and half kilometer stretch between Dera Baba Nanak and Kartarpur Sahib.

Previous: A Kirpan is Not a Threat – It’s my Cultural Heritage
Next: NSFY to launch Sikh history exhibition to commemorate Sikh Genocide 1984 & raise awareness about human rights