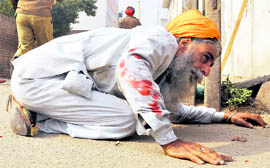 Ludhiana, Punjab: The city continued to boil up for the second consecutive day following the killing of one elder Sikh (shown in left picture: Darshan Singh), who was protesting against the holding of a congregation by chief of the Divya Jyoti Jagriti Sansthan Ashutosh.Cult leader Ashutosh continue to speak against the religious text of the Sikhs, Guru Granth Sahib since 1980’s.

Darshan Singh, the victim, who resides at Lohara village, died on the spot. Twelve others sustained injuries when the police opened fire at the Cheema Chowk, where the activists of panthic organisations were leading a march towards PUDA grounds in Urban Estate where the religious discourses by Ashutosh Maharaj was being organised.

Following the incident, tension gripped the city. While there wasn’t any panic in the city yesterday, anxiety was writ large on the faces of residents today. District magistrate Vikas Garg ordered dera headed by Ashutosh to vacate the place at earliest. Heavy police was deployed outside the venue to protect it.

Witnesses attest that Honey Bedi was present at the protest site, and shot a firearm in the direction of the protesters. The organizations have requested that along with cult leader Aushutosh, Parkash Badal, Harish Bedi and his son should to be held responsible for the bloodshed in Ludhiana.

Meanwhile the Sikhs today imposed bandh in Ludhiana, industrial hub of Punjab. Sikhs have announced to observe complete Ludhiana Bandh tomorrow to protest against misdeeds of Punjab government in protecting and promoting anti-Sikhs sects and deras.