At the 550th commemorations of the birth of the Guru Nanak (founder of the Sikh faith) the Sikh Museum Initiative revealed a special Sikh coin in 3d. The Initiative have been working on 3d technologies for many years and on this important occasion, it was fitting for a special tribute to be created. Visitors at the event were able to see the coin and other objects on 3d touchscreens.

Whilst there have been depictions of Guru Nanak in manuscripts, frescoes and even arms and armour, the focus on coins has been limited. Generally, there has been coverage given on so called ‘Temple Coins’ that bear the depictions of the Guru with Bhai Bhalla and Bhai Mardana. However, this coin is significantly different from others and was minted during the reign of Maharajah Ranjit Singh during the Sikh Empire period. 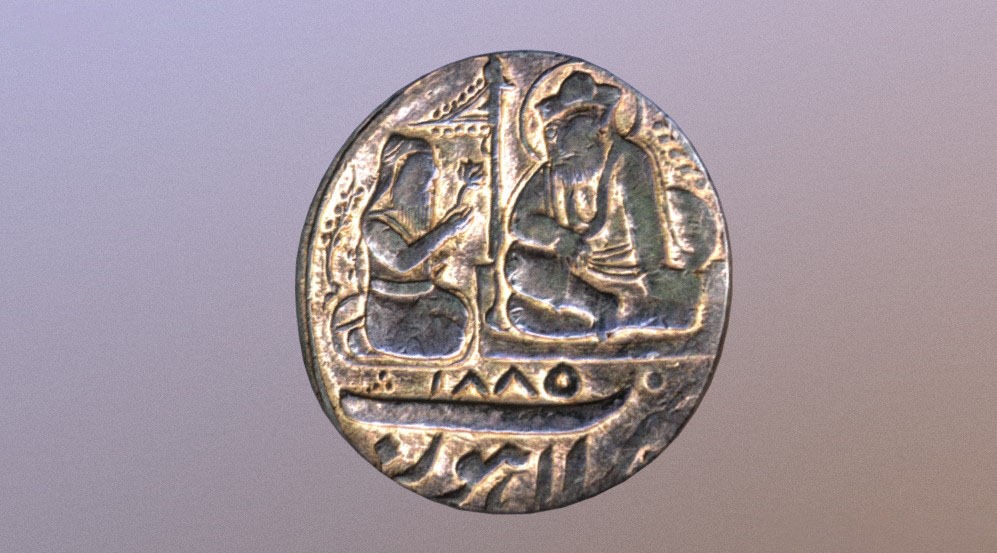 Jeevandeep Singh (Numismatist) from Ludhiana, Punjab who lent his knowledge to the project stated, “On the occasion of the 550th Birth Anniversary of Guru Nanak, one of the rarest Nanakshahi coins from the Sikh Empire, which showcases the ethos of the entire Sikh community towards the Guru’s, has been recreated in 3d. giving you the ability to almost hold history in your hands”

The coin image depicts Maharajah Ranjit Singh sitting (on his knees) in front of Guru Nanak (seated cross legged) and offering floral tributes at the feet of the Guru. In the middle is a Sikh flag (Nishan) separating both individuals and signifying Sikh Sovereignty. The coin shows the humility of the Maharajah and subservience to the Guru.
The text in Persian can be translated as:

This inscription was a common slogan used from the time of Banda Bahadur, during the Sikh Misl period of the eighteenth century and throughout the Sikh Empire period. The place where the  Coin was struck, is also described on the coin:  Zarb Lahore-Struck in Lahore.

The coin forms part of the project: Anglo Sikh Virtual Museum where there are other objects that can be seen in 3d and virtual reality. If you would like to support the project then please click here
Please visit https://www.anglosikhmuseum.com/relics/

The project is funded by the National Heritage Lottery Fund and supported by Taran3d.