Gurdarshan Dhillon mentions names of two persons Mr Wilkinson and Mr Malcolm in the video above posted article whom he alleges for having planted Sri Dasam Granth in Punjab.

Mr Dhillon does not even know the name of Mr Wilkins as he calls him Wilkinson. Sir Charles Wilkins was a writer stationed at Calcutta around 1770 AD. He set up Asiatic society of Bengal and learnt Sanskrit because of his hobby to learn about other religions. He was also a scholar of Islam. He stayed in India for 16 years (1770-1786). He also made visits to holy shrines of other religions to learn about their customs.

During a visit to Benaras, he made a stop at Patna, and visited Patna Sahib Gurudwara, the birthplace of Guru Gobind Singh Ji. He wrote his account of this visit titled as ‘Sikhs and their College at Patna’. He writes about Dasam Granth there and notes in his article.

The Seeks And Their College At Patna, By Sir Charles Wilkins

They told me further, that some years after this book of Noneek Sah had been promulgated, another made its appearance, now held in almost as much esteem as the former. The name of the author has escaped my memory; but they favoured me with an extract from the book itself in praise of the Deity. The passage had struck my ear on my first entering the hall when the students were all engaged in reading. From the similarity of the language to the Hindoovee, and many Sanscrit words, I was able to understand a good deal of it, and I hope, at some future period, to have the honour of laying a translation of it before the Society. They told me I might have copies of both their books, if I would be at the expense of transcribing them.

Mr Dhillon should know that Sir Charles Wilkins wrote what he saw. 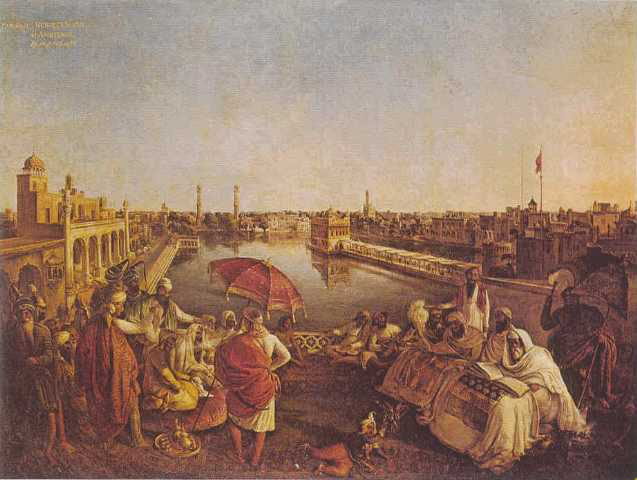 Second Englishman he names is Charles Malcolm (1769-1833) who came to Amritsar in pursuit of Maratha chief Holkar who had taken refuge with Maharaja Ranjit Singh. He was a Colonel in the army. The year was 1805 and he witnessed last Sarbat Khalsa of Sikhs at Akal Takhat, Amritsar. From his observations of Sikhs , he wrote a book “A sketch of Sikhs” and he writes about two Granths in parkash at the Sarbat Khalsa.

When the chiefs and principal leaders are seated, the Adi-Granth and Dasama Padshah ka Granth are placed before them. They all bend their heads before these scriptures, and exclaim, Wa! Guruji ka Khalsa! Wa! Guruji ki Fateh! A great quantity of cakes, made of wheat, butter, and sugar, are then placed before the volumes of their sacred writings, and covered with a cloth. These holy cakes, which are in commemoration of the injunction of Nanac, to eat and to give to others to eat, next receive the salutation of the assembly, who then rise, and the Acalis pray aloud, while the musicians play. The Acalis, then the prayers are finished, desire the council to be seated. They sit down, and the cakes being uncovered, are eaten of by all classes of Sikhs: those distinctions of original tribes, which are, on occasions, kept up, being on this occasion laid aside, in token of their general and complete union in one cause. The Acalis then exclaim: “Sirdars! (Chiefs) this is Guru-mata!” on which prayers are again said aloud. The chiefs, after this sit closer, and say to each other: “The sacred Granth is betwixt us, let us swear by our scripture to forget all internal disputes, and to be united.” This moment of religious fervor and ardent patriotism, is taken to reconcile all animosities. They then proceed to consider the danger with whcih they are threatened, to settle the best plans for averting it, and to choose the generals who are to lead their armies against the common enemy. The first Guru-mata was assembled by Guru Govinid; and the latest was called in 1805, when the British army pursued Holkar into the Penjab. (pages. 120-123)

Here is the picture of The Illustrated News of London Dated April 4,1845 where in they mention about visit of Charles Malcolm to Punjab and presence of Dasam Granth there. 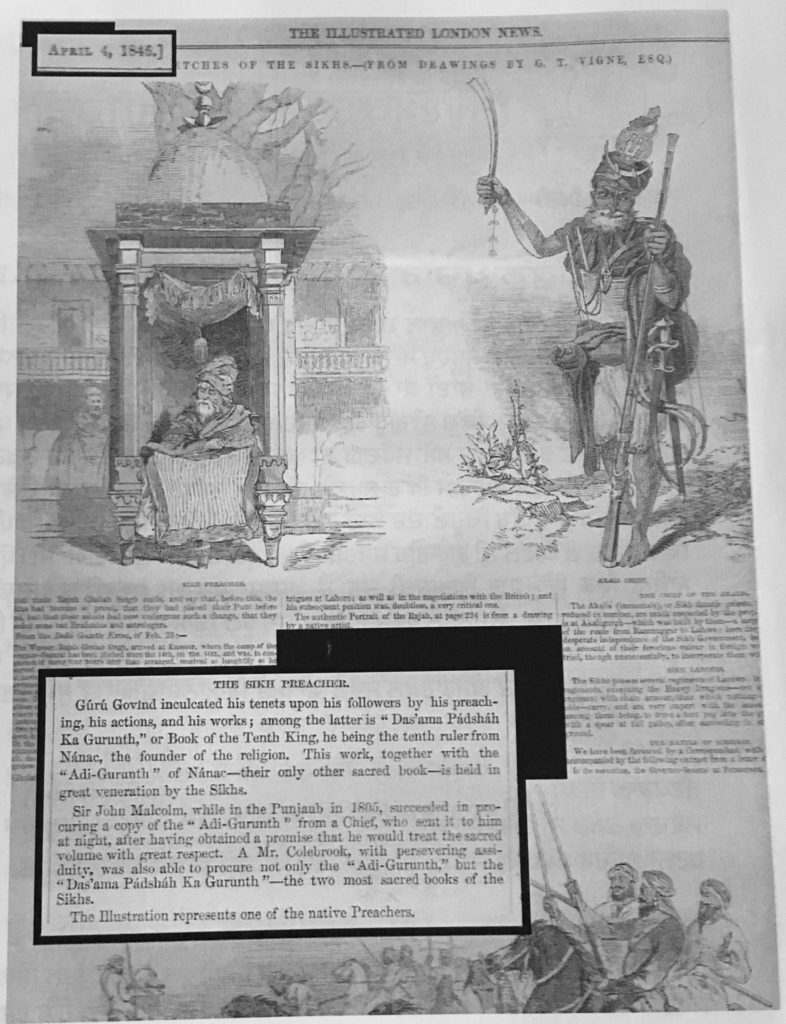 Copy of the page from “Illustrated London News” of April 4, 1846 documenting the presence of ‘Dasama Padshah ka Gurenth’ as one of the two holy scriptures of Sikhs in Punjab as early as 1805, completely tearing down the contention of today’s pseudo-scholars that the first copy of Dasam Granth was brought to Punjab in 1860 by the British. Original clipping is in a private collection in California.

From above it clear that these English visitors wrote what they saw of Sikh practices. These practices were already being observed by the Sikhs. Both of them died much before the annexation of Punjab by the British.
Gurdarshan Dhillon in his typical style raises bogey of RSS giving patronage to Sri Dasam Granth and says they support it because it praises their avtars and deities. I would request Mr Dhillon to read it as there is no other Granth which comes as heavily on Brahminical beliefs as Dasam Granth. Some of the stanzas are given below: