MANHATTAN (CN) – A Sikh rights group sued Secretary of State John Kerry, asking him to declare the Hindu nationalist group Rashtriya Swayamsevak Sangh a terrorist organization, for its efforts to forcibly convert all Indians to Hinduism.

Comparing the Hindu group to Nigerian terrorists Boko Haram, Sikhs for Justice sued the Secretary of State on Wednesday in Federal Court. It asked the court to declare “India’s Hindu supremacist group known as ‘Rashtriya Swayamsevak Sangh’ (RSS) as a ‘foreign terrorist organization,’ for believing in and practicing a fascist ideology and for running a passionate, vicious and violent campaign to turn India into a ‘Hindu’ nation with a homogeneous religious and cultural identify.”

The RSS name in Hindi means “National Volunteer Organization.” It was founded to unite the Hindu community against British colonialism in India. A former RSS member, who left to join a more militant organization, assassinated Mahatma Gandhi for his support of Indian Muslims.

Sikhs for Justice claims the RSS instigated the June 1984 Indian military attack known as Operation Blue Star, which raided Sikh shrine the Golden Temple, targeted Sikhs in the countryside, and burned down the Sikh Reference Library. The Indian government claims about 500 civilians died in the operations, but other estimates run much higher.

Prime Minister Indira Gandhi was assassinated months later by two of her Sikh bodyguards in revenge, launching the ensuing anti-Sikh riots in which more than 3,000 Sikhs lost their lives.

The 83-page lawsuit also accuses RSS of the “1992 demolition of historical Babri Mosque, the burning churches and rape of Christian nuns in Orissa and elsewhere in 2008, the 2002 massacre of Muslims in Gujarat; attacks on several other places of worship belonging to different religious minorities; [and the] bombing of public places such as trains and buses.”

“On August 22, 2014, RSS Chief Mohan Bhagwat unequivocally announced his party’s agenda by stating that, ‘The entire world recognizes Indians as Hindus, therefore India is a Hindu state.’ In December 2014, RSS launched a nationwide campaign called ‘The Home Coming’ to forcibly convert Christians and Muslims to Hindus, resulting into engulfing of thousands of members of religious minorities into the ‘Hindu fold,'” the complaint states.

The Daily Mail reported on Dec. 20, 2014 that Bhagwat told supporters: “We are not out to convert anybody or change anybody’s religion, but if Hindus do not bring about change, then Hinduism will never undergo change. We stand firm on this issue. We will save people from those who behead people. … When the thief is being caught and my property has been recovered, when I am taking back my own property, what is new in it?”

The complaint compares RSS to the Nigerian terrorist organization Boko Haram, which Sikhs for Justice claims “lives by the motto ‘convert or die’ in its actions against religious minorities specifically the conversion of Christians.”

Sikhs for Justice wants the Department of State to declare RSS a foreign terrorist organization, which will eliminate, or at least complicate, its fund-raising sources in the United States.

Sikhs for Justice is represented by Babak Pourtavoosi with Pannun The Firm in Jackson Heights. 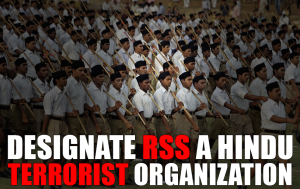 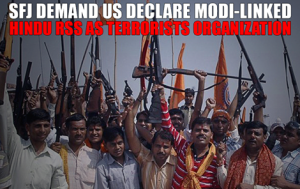