Brutality of ISIS is the copy of what Mughals did with Sikhs of Punjab [Warning: graphic images]

Stockton, California: The history of Sikhism is closely associated with the history of Punjab and the socio-political situation in medieval India. Sikhs distinction was further enhanced by the establishment of the Khalsa, by Guru Gobind Singh in 1699. Sikhism was created by Guru Nanak, a religious leader and a social reformer during the fifteenth century in the Punjab region. The religious practice was formalized by Guru Gobind Singh on 13 April 1699. The latter baptized five persons from different social backgrounds to form Khalsa.

The Mughal Empire was founded by Babur, a Central Asian ruler who was descended from the Turko-Mongol conqueror Timur on his father’s side and from Chagatai, the second son of the Mongol ruler Genghis Khan, on his mother’s side. Ousted from his ancestral domains in Central Asia, Babur turned to India to satisfy his ambitions. He established himself in Kabul and then pushed steadily southward into India from Afghanistan through the Khyber Pass. Babur’s forces occupied much of northern India after his victory at Panipat in 1526. Generally Sikhism has had amicable relations with other religions. However, during the Mughal rule of India (1556–1707), the emerging religion had strained relation with the ruling Mughals. Prominent Sikh Gurus were martyred by Mughals for opposing some Mughal emperors’ persecution of Sikhs and Hindus. Subsequently, Sikhism militarized to oppose Mughal hegemony and ended their rule in India.

What ISIS is doing is the exact copy of what Mughals did against Sikh Gurus and followers of Sikhism from 15th century to 18th century. Mughal Empire wanted whole India to be converted to Islam religion. Hindus started converting to Muslim because of fear. Watching hundreds of thousands conversion and the fear for their own life, Hindu religious leaders came and asked for help from Sikh Gurus and his followers. Sikh Gurus stepped up to protect freedom of religion (which was unheard on any corner of the world at that time) and Mughals started the same brutal war crime against Sikhs is exactly what Islamic State in Iraq and Syria (ISIS) is doing today in 21st century. 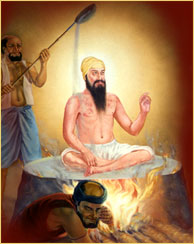 Guru Arjan Devi ji was put on hot plate by mughals and they poured hot sand on top of Sikh Guru.

The Mughal emperor Jahangir wrote in his autobiography Tuzk-e-Jahangiri that too many people were becoming persuaded by Guru Arjan’s teachings and if he did not become a Muslim the Sikh Panth had to be extinguished. HE ordered the Guru’s execution A contemporary Jesuit account, written in early 17th century by Spanish Jesuit missionary into the Mughal court Father Jerome Xavier (1542–1605), who was in Lahore at the time, records that the Sikhs managed to get Jahangir to commute the death sentence to a heavy fine, for which a rich individual, possibly a Sikh, stood as guarantor. The Guru however refused to let a fine be paid for him and even refused when a longtime friend of his, Sufi Sai Mian Mir, tried interceding on his behalf. Jahangir tortured Guru Arjan in the hopes of extracting the money, but the Guru refused to give the fine and was executed. 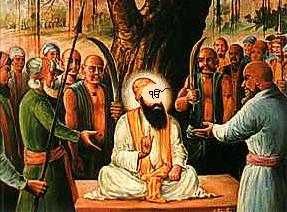 The Mughal Emperor Aurangzeb ordered Hindu temples to be destroyed and that idol worship was to be stopped. He had a temple converted into a Mosque and slaughtered a cow inside it. He also had Hindus sacked from their government jobs and employed Muslims instead. Aurangzeb also ordered Gurdwaras to be destroyed, and he expelled many missionaries from the main cities. Despite some resistance after many years of persecution, people were being forced to take up Islam. Aurangzeb, being clever, decided if he could convert the revered Brahmin Pandits of Kashmir that millions of followers would then easily be converted. Threatened with conversion or death, the Pandits overcome by panic, came in a delegation to Chakk Nanaki, Pargana Kahlur and requested Guru Tegh Bahadur Ji’s help. Hearing the serious nature of the conversation, Guru Ji’s 9 year old son Gobind Rai Ji told his father what the problem was. The Guru told his son of the Pandits dilemma and said that it would take a holy man literally laying down his life to intercede. Gobind Rai responded “Who would be better than you to defend the poor Brahmins”. Guru Tegh Bahadur Ji decided to stand up for the right of freedom of worship and told the delegation to tell Aurangzeb that if he could convert Guru Tegh Bahadur they would gladly convert.

After Mati Das, Dyal Das and Sati Das were tortured and executed on three consecutive days, Guru Tegh Bahadur was beheaded at Chandni Chowk in 1675. Guru Tegh Bahadur is popularly known as “Hind Di Chadar” i.e. “The Shield of India”, in reference to his popular image as sacrificing his life for the protection of religious freedom in India.

Bhai Sati Das was wrapped up in cotton wool, set alight and was roasted alive. He remained calm and peaceful and kept uttering Waheguru, waheguru, waheguru (Sikh meditation). His martyrdom is remembered by the Sikhs in their daily prayers. This happened on 24 November 1675, on the same day as Bhai Mati Das was executed. 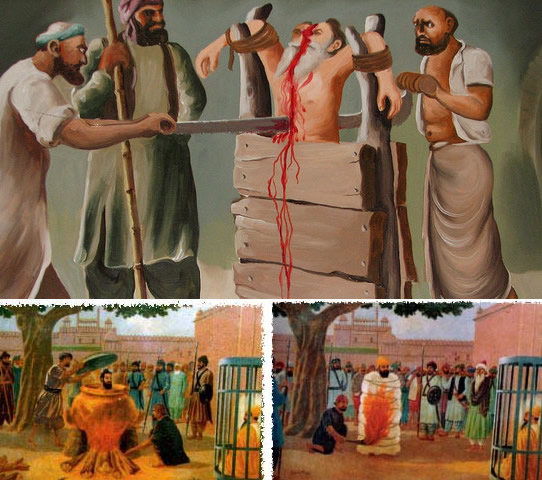 Mati Das while standing erect was tied between two posts. He was asked if he had any parting words, to which Mati Das answered, “I request only that my head be turned toward my Guru as I am executed.” Two executioners placed a double-handed saw on his head. Mati Das serenely uttered “Ek Onkar” and started reciting the Japji Sahib, the great morning prayer of the Sikhs. He was sawn in half from head to loins. It is said that even as the body was being sawn into two, the Japji continued to reverberate from each part until it was all over.

Qazi pronounced his religious order that Bhai Dayala must either accept Islam or be prepared to embrace death by being boiled in a Cauldron. Bhai Dayal was asked for a final time if he would leave his faith and embrace Islam. Bhai sahib defiantly and consistently answered, “No!” to the qazi’s repeated requests. This infuriated the qazi who pronunced his immediate torture and death. The executioners sat Bhai Sahib in the cauldron of water under which a large fire was lit. Slowly the water was let warm; then it was hot; soon it was too hot and then it was boiling. Bhai Dayala continued to his last breath to recite Sikh prayers. 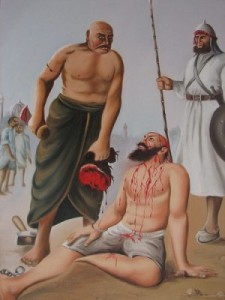 After a short period of imprisonment and torture, Bhai Taru Singh ji was brought by Mughals before Lahore Governor Zakariya Khan and given the choice of converting to Islam or being executed. Taru Singh calmly asked, “Why must I become a Mussalman (a Muslim person)? Do not the Mussalmans ever die?” Upon his refusal, and in a public display, Bhai Taru Singh’s scalp was cut away from his skull with a sharp knife to prevent his hair from ever growing back. Bahi Taru Singh ji was left to bleed to his death by Mughals.

Mass torture and persecution of Sikhs

Zakariya Khan was the Mughal governor of Lahore, now in Pakistan. He had taken part in the Mughal Empire’s operations against the Sikh leader Banda Singh Bahadur. After the capture of Banda Singh and his companions in December 1715, he escorted the prisoners to Delhi, rounding up Sikhs that he could find in villages along the route. As he reached the Mughal capital, the caravan comprised seven hundred bullock carts full of severed heads and over seven hundred captives. He ordered village officials to capture Sikhs and hand them over for execution. A graded scale of rewards was laid down – a blanket for cutting off a Sikh’s hair; ten rupees for information about the whereabouts of a Sikh; fifty rupees for a Sikh scalp. Plunder of Sikh homes was made lawful; giving shelter to Sikhs or withholding information about their movements was made a capital offense. 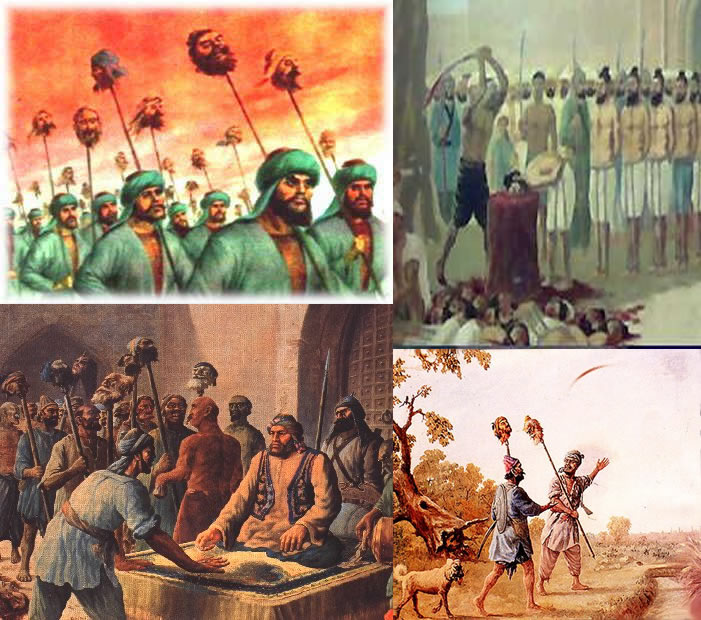 Zakariya Khan’s police, consisting of nearly 20,000 men especially recruited for this purpose, scoured the countryside and brought back hundreds of Sikhs in chains. Prominent Sikhs including the revered Bhai Mani Singh and Bhai Tariff Singh were, after the severest of torments, publicly beheaded at the Nakhas, the horse-market of Lahore, renamed by Sikhs “Shahidganj” in honour of the martyrs. Yet Zakariya Khan remained unsuccessful in his object of vanquishing the Sikhs. He died at Lahore on 1 July 1745 a dispirited man, bequeathing to his sons and successors chaos and confusion. 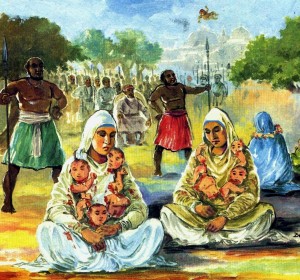 The Sikh women held as prisoners in Mir Mannu’s Jail (1748-1753) who endured the pain of having their children murdered and made into garlands around their necks but did not sacrifice their faith. During 18th century Sikh women were arrested and endured torture in Mir Mannu’s Jail in Lahore, they chanted: “ਮਨੂੰ ਸਾਡੀ ਦਾਤਰੀ ਅਸੀਂ ਮਨੂੰ ਦੇ ਸੋਏ || ਜਿਉਂ ਜਿਉਂ ਮਨੂੰ ਵਢਦਾ ਅਸੀਂ ਦੂਣ ਸਵਾਏ ਹੋਏ || (We are the grass, and Mannu the sickle (grass-cutting blade); The more he cuts us, the more we grow.)”