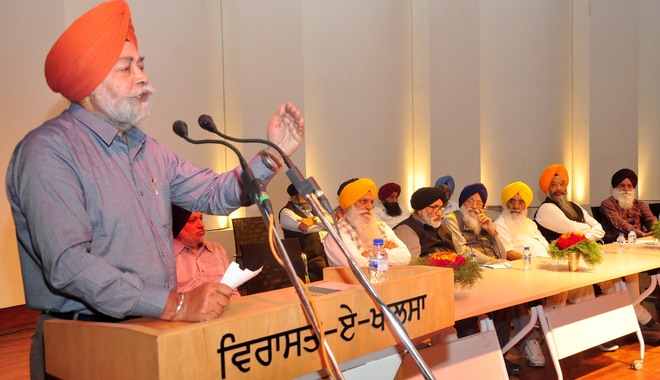 Amritsar, Punjab: Badal Senior, Badal Junior and their party workers had enough time till Sarbat Khalsa to blackmail and buyout so-called panthic leaders. They are offering all type of benefits that their government can offer to dera heads in order to buy their silence. Both Badals are visiting every corner of Punjab and politically forcing Sikh jatha leaders to issue their own public announcement of boycotting Sarbat Khalsa.

Bhai Dhumma belonging to Sant Samaj is the first one to announce his disagreement with Sarbat Khalsa and announced that Taksal will not support November 10th Sarbat Khalsa. Bhai Dhumma made this announcement to Press in Amritsar after having close door meeting with Sukhbir Badal. It is noted that Bhai Dhumma of Sant Samaj met with Badal 9 times after the shooting incident.

Bhai Rampurkhera Sahib mukhi Baba Sewa Singh also met with Sukhbir Badal but however according to press, he will not issue nor agree with government’s request of not supporting Sarbat Khalsa.

SGPC also reaching out to sikh scholars and small faction leaders who can agree with them in return of small favors. SGPC allotted sangat’s funds to release serveral paid newspaper advertisements. This is all being done without the approval SGPC executive members approval.

In a SGPC and Badal camp sponsored conference held in Anandpur Sahib, Prof Harpal Singh Pannu, an eminent Sikh scholar and writer, said the jathedars should be replaced immediately.

Pannu said that as SAD president Sukhbir Singh Badal had used the jathedars to get the dera chief pardoned, he should seek pardon from the Sikh Panth. The SGPC president should also seek forgiveness from the Panth for suspending the “Panj Pyaras” as it was an absolutely wrong decision.

Later, the SGPC president was asked whether he would seek forgiveness, he ducked the question by raising another matter.

In next few days, many small faction of sikh leaders will sell out as history repeats itself.