Comments Off on Sikh Soldier: Warriors and Generals 499 Views 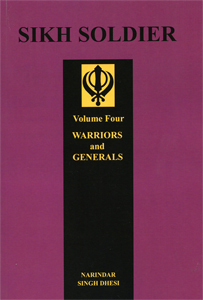 This book, written by Narindar Singh Dhesi, profiles the Sikh Sardars who had been deprived and considered dregs of society, become leaders of the downtrodden people and raised them to a point where they became masters of their own destiny. The Sardars, during this period, not only confronted political powers, especially the Mughals and Afghans, but with their strong arm were able to carve out their own independent principalities in the land in which they were but a tiny minority. One of the leading Sardars, Ranjit Singh, was able to baffle with his genius the British and the Afghans to establish a Sikh Empire, extending from Tibet to the deserts of Sindh and from the Khyber Pass to the River Satluj. A galaxy of Sikh Sardars and Generals served the Sikh Empire and perished in defending it. In the style which caused his Sikh Soldier: Battle Honours, Sikh Soldier: Gallantry Awards and Sikh Soldier: Policing the Empire books to become mainstays of Sikh martial history since their publication, Narindar Singh Dhesi again brings his orderly thoroughness to the evaluation of the Sikh military leaders. The book goes on to depict the senior Sikh military leaders of all the armed services of the Indian Armed Forces, as well as the Sikh military officers of the Sikh Diaspora. A well-researched and well-written book, this is a worthy sequel to the author’s earlier publications on the Sikh soldiery.

2014-02-02
SSNews
Previous: Sikhs to serve langar in front of Rahul Gandhi’s of house
Next: Sikh Groups Call On Obama To Reinstate IRS Agent Fired For Wearing Religious Article Of Faith