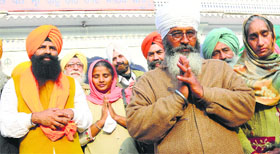 Mohali, Punjab: Shamsher Singh and Lakhwinder Singh returned to Model Jail, Burail, in Chandigarh this evening after completion of their 28-day parole.

Accompanied by family members, relatives and leaders of various Sikh organisations, the detainees paid obeisance at Amb Sahib Gurdwara before returning to the jail.

“Now, we want that the SAD government and those who had promised to secure our release should keep their word,” said Lakhwinder.

Lakhwinder’s father Darshan Singh, his sisters Sukhwinder Kaur and Paramjit Kaur and their husbands had come from Ludhiana to see him off.

Lakhwinder said he had stayed at his sister’s home in Ludhiana for most of the period. “I only went to the Golden Temple and my village Narangwal when I was out on parole,” he said. Shamsher said he visited the Golden Temple and mostly remained at his residence in Usski Jattan near Rajpura. “I spent Lohri with my family after a gap of about 19 years,” said Shamsher. Gurmeet Singh, another convict, had returned on Thursday.

Previous: Save girl child: School takes out candlelight march to spread awareness
Next: Sikh group wants Sonia to depose before US court