Sikh group wants Sonia to depose before US court 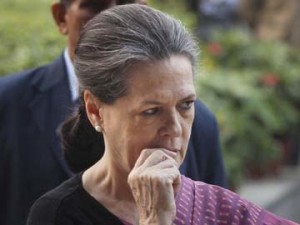 New York, USA: A Sikh rights group wants Congress president Sonia Gandhi to depose before a federal court here in a human rights violation lawsuit filed against her after she informed the court that she had not visited the US in September last year and was not served summons in the case.

Sikhs For Justice (SFJ) has been given time till February 6 by the court to “investigate” whether Sonia was in the city between September 2 and September 9, 2013, and file its opposition to Gandhi’s motion to dismiss the human rights violation lawsuit due to insufficient service of summons.

SFJ legal attorney Gurpatwant Singh Pannun said the plaintiffs will request the court to make the Congress president depose before it regarding her presence in the US in September 2013 and on the service of summons on her.

Sonia had submitted a new declaration on January 13 to the US court in support of her motion to dismiss the lawsuit.

In the declaration, Sonia stated that she was “not in New York or in the US during the said period”. But, the SFJ claimed she was in the city for medical treatment at the Sloan Kettering Cancer Centre.

Previous: Sikh Political Activists back in Burail jail
Next: Sikh Shopkeeper who battled with knife-wielding racist