London, UK: Nine volunteers, along with the National Army Museum’s (NAM’s) three staff members, rode on the top deck of the B-type battle bus dressed as soldiers of the 15th Ludhiana Sikh regiment during the 799th Lord Mayor’s show in London on Saturday.

The procession began on the Thames river around 11am (4.30pm IST), with the Lord Mayor boarding QRB Gloriana.

The NAM with its soldiers, in collaboration with the London Transport Museum, and their restored battle bus highlighted the significance of the centenary of World War 1 in a unique way. Both museums recreated and restored an element each to demonstrate how the battle bus was used to carry Indian soldiers to the Western Front.

The recreated regiment paid a special tribute to the Lord Mayor with a salute and traditional war cry ‘Sat Sri Akal’, which was well received by newly-appointed Lord Mayor Alan Yarrow.

The Sikhs were cheered by the crowds lining the streets of London, paying tribute to the Indian contribution to the Great War. The volunteers also spoke with members of the public about their project, experiences and reasons for attending the event in uniform. 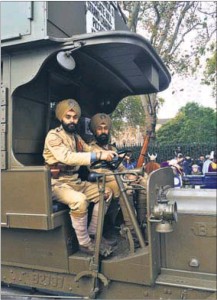 First-time volunteer to the War and Sikhs project Navjit Surdhar said: “I felt privileged to be a part of the Lord Mayor’s show. Being on board a bus that carried Sikh soldiers to the war in the uniform that Sikhs wore in World War 1 was like traveling back in time. I felt as if I was receiving the waves, applause and respect from the public on behalf of the Sikhs that gave their lives a century ago.”

Expressing joy over the overwhelming response received from the public, project officer Jasdeep Singh said: “I felt honoured to take part in an event that has been a part of London’s history for centuries. We felt like heroes on the bus having returned from war. I hope that the fallen heroes were able to receive the praise though our eyes.”

The event was attended by about half a million people and a live telecast was also seen on TV by another million. The War and Sikhs: Road to the Trenches project would feature many events across the UK, including one at the House of Parliament in London on Monday.