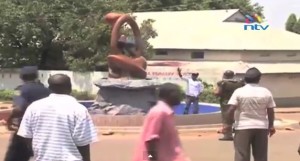 Kenya, Africa: The Hindu Council of Kenya has written a protest letter to the Kisumu county government over the removal of a monument erected by the Sikh community. “We wish to point out that the new constitution upholds the fundamental rights and dignity of all races and groups of persons,” the Hindu Council said.

The Council also said that authorities have the moral duty to protect all races and ethnic communities that are being unfairly targeted. The monument was pulled down on Saturday following three days of protests by Kisumu residents who said it portrayed Kisumu as a haven Kisumu as a haven of idol worshipers