Comments Off on Gurdaspur Violence Case: Jaspal Singh confirmed to be killed with Police bullet 634 Views 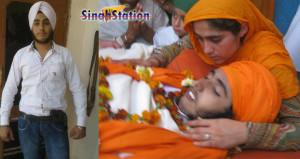 During the investigation by CFSL Hyderabad, they have identified musket shot fired by the police at the scene.

CFSL provided this information during the hearing on Monday to the Punjab and Haryana High Court.

During the hearing, counsel for the petitioner NGO questioned the charge sheet in this case against the police but the government has nonetheless instituted a departmental inquiry against the officers.

The Punjab government’s Home Department Principal Secretary DS Bains said in the interim report submitted to the High Court that the investigation authorities have issued instructions for departmental action against the guilty. The government has issued instructions on November 18 last year.

It is to be noted that the violence erupted in Gurdaspur after hanging sentence of Balwant Singh Rajoana in assassination case of former Punjab chief minister Beant Singh. During a clash between police and miscreants, young Sikh boy Jaspal Singh was killed and some were injured.