Arvind Kejriwal – A true dedicated politican that India can ever have

Delhi, India: Delhi Chief Minister Arvind Kejriwal’s resignation has only raised his stock among the common people of Delhi, the ‘aam aadmi’, who form his core support base and who believe he will come back to power with a more emphatic majority and play a larger national role after the general election.

Kejriwal resigned dramatically from his post after 49 days of coming to power as he failed to get his dream bill, the Jan Lokpal, even introduced in the Delhi Assembly on Friday as both the national parties, the Congress and the BJP, ganged up against it.

“So what if Kejriwal has resigned? This resignation proves that only a ‘jhaadu waala’ (referring to the party symbol of ‘jadhu’ or broom) can deliver and end corruption in the city,” Hanumanth Rai, from Hissar told IANS.

“Other parties are not supporting him because they know that if the bill is passed their leaders will land in jail,” he said.

Kejriwal had on numerous occasions threatened to resign if the bill was not passed. 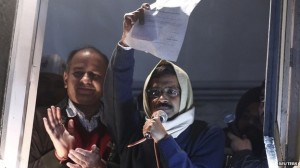 “We are with him in his resignation also. There should be a re-election as we are sure that next time he will win more than 50 seats and get the bills passed without support,” Radha Sharma, a resident of Burari in outer Delhi, told IANS.

“He will come back to power. Today, on the day he resigned, I can even assure you that,” she added.

Flashing the party symbol (the broom) and wearing the trademark side cap AAP supporters were firm that their fight would continue.

“Today’s scenario only reflects that AAP is on right way to win the upcoming elections,” Prem Chauhan, an auto-rickshaw driver, told IANS.

While some felt Kejriwal should have been given more time, others expressed anguish over their demands remaining unfulfilled.

“Who will look after our demands now? We doubt if any other party can even come close to Kejriwal’s work,” Arvind Chautala, a daily wage worker, said, reflecting the huge support Kejriwal enjoyed among the working class and very ordinary people of this capital city.

“I was expecting to rejoice the introduction of the bill, but here I am waiting for my hero to resign,” he said.

“My admiration for him has gone up manifold after he took on (Reliance chairperson) Mukesh Ambani. It takes a lot of guts to do such a thing. I am a total AAP supporter and will vote for the party in the general and Delhi elections,” said Bhuvana, a resident of south Delhi.

Previous: Continue to Deny Narendra Modi a Visa to the United States – Petition
Next: 70% of the Punjabi youth are on drugs; still no outcry in Punjab