Amritsar, Punjab: The 30th anniversary of the Indian government’s 7 day brutal and bloody crackdown on pro-human right activists in Golden Temple was passing quietly in Amritsar, but for some it is not completely forgotten. 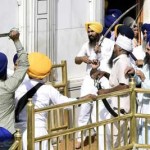 Sri Harmandir Sahib and the narrow avenue that leads to it were both little eerily tense on the anniversary week, with intelligence police and pro-GOI SGPC task force out in force in every corner. Each year, the government goes out of its way to make sure that little is said or heard about what happened here in the summer of 1984. On the smaller level, Punjab government makes sure that GOI keeps an iron hand on SGPC chief and its members.

Authorities blacked out and barred international news channels to report on the 30th anniversary this week. Clash that occurred on June 6th in Akal Takht shows an attempt of SGPC to keep control of stage and for years trying to keep it away from panthic (pro-sikh) sikh. GOI and SGPC are working together for the past 35 years.

State broadcasts focused on official meetings of Modi government, a road accident of cabinet minister and the environment among other topics. The anniversary was absent in state media, except The Tribune ran a news item on behalf of Shiv Sena regarding tearing up posters of Jarnail Singh Bhinderanwale, a sikh activist leader who died 30 years ago defending Harmander Sahib. 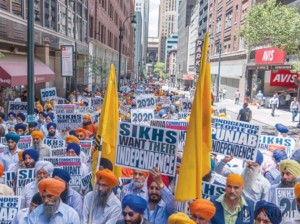 Sikhs For Justice Rally in front of UN

Thousands marched in financial district of New York on June 6th and another rally in tourist busy market street of San Francisco. There was another major rally in London; thousands marched from Hyde Park to Trafalgar Square, pressuring UK Government to reveal disclosed information regarding it’s hand in killing thousands of innocents sikh pilgrims in attack of Harmander Sahib in 1984.

But what about the residents of Punjab, what do they remember or think? To find out, we took to the streets. Given the government’s hypersensitivity during the anniversary, we let their feet do the talking.

Most people especially the youth were unaware of what happened 30 years ago. Older generation remembered events more clearly but did not want to talk about it.

“In the morning, I was in Amritsar near that very place and then later in the afternoon I heard that the tanks and troops had come into the city,” one elderly gentleman recalled. “It was terrifying.”

Some, too young at the time, heard details later from others. “They said that Sri Harmander Sahib was filled with mostly family members who were there to mark the important day of Sikh historic religious event. Later on all of them were dead and there was blood everywhere,” a woman said.

The Indian government has gone to great lengths to silence talk of the anniversary every year, throwing several activists in jail, just for discussing the topic in private. Raising diplomatic false statements, press releases and charges against peaceful activists in Canada, England and United States.

On the streets, few were aware of the arrests ahead of the anniversary. 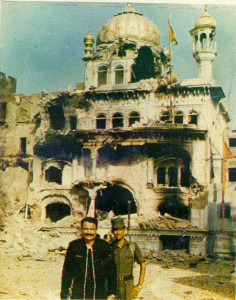 Attitudes about the level of personal freedoms in Punjab ranged from glowing support to apathy.

“Look at all the foreigners who come here and bring their families. They wouldn’t be here if it wasn’t free,” said one woman in chaste Hindi.

“It’s true that there’s no freedom, but that is the reality. Living in this country you need to just follow the rules and make sure your basic needs are met,” added one man.

“Whatever the Indian government says, goes. Society today is no different from the age of emperors in the past,” another woman clarified.

“There will always be those who are not satisfied with the government. But what most people really care about is living their lives in peace,” a man added.

The Indian government said that it has already delivered a verdict on the political turmoil of the late 1980s. It also said there are no dissidents here, just lawbreakers.

Previous: Punjabi cinema plans to highlight 1984 Sikh genocide in its own way
Next: The untold history of Sikh rule under Ranjit Singh in Lahore: Fakir Syed