Comments Off on To curb chaos, special traffic stickers near Harmander Sahib 539 Views 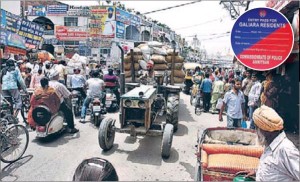 Amritsar, Punjab: To decongest areas around the Golden Temple from traffic chaos, the Amritsar traffic police have issued special stickers to the denizens of these areas, besides employees of Shiromani Gurdwara Parbandhak Committee (SGPC).

The aim is to streamline traffic, besides bring down pollution levels in the area. With more than 1.5 lakh devotees thronging the temple every day, chaos reigns supreme on all roads leading to the shrine.

As many as 153 stickers bearing ‘Entry Pass for Galliara Residents,’ besides serial and registration number, make and colour of the vehicle and date of issue have been issued to area residents and SGPC employees.

Baljit Singh Randhawa, ADCP traffic, told HT, “Only residents sporting the special sticker will be allowed to enter the areas around the Golden Temple.”

“This will help bring down pollution levels and streamline traffic,” he added. On visitors coming from faraway places, Randhawa said, “They will have to park their vehicles at the nearby parking lots before proceeding towards the shrine.”

He said the entry of auto-rickshaws had already been curbed in areas around the shrine.

Meanwhile, moving a step ahead in curbing pollution, the district administration is mulling to install an instrument worth ` 1.5 crore to monitor pollution levels in the area.

Deputy commissioner Ravi Bhagat said a concerted effort was being made to decongest roads around the temple and make the area pollution free.