Delhi, India: The Supreme Court on Friday dismissed Engineering Professor Bhullar’s plea for commutation of his death sentence to life imprisonment on ground of delay in deciding his mercy plea. Delivering the verdict in a packed court room, a bench of justices G S Singhvi and S J Mukhopadhaya said that the petitioners failed to make out a case for commutation of sentence.

The Supreme Court had confirmed his death sentence in 2002, and Bhullar has been in solitary confinement since then.

It has also been pointed out that the Supreme Court had upheld Bhullar’s death sentence in 2002, and during the last nine years, he has been living in solitary confinement and according to his medical reports, has been suffering from depression since the last six years.

He is currently admitted in a mental hospital inDelhiand is under acute depression. A writ petition has been filed in the Supreme Court, seeking conversion of his death penalty into life imprisonment.

“The President was not made aware of the mental state of Bhullar and it would be inhumane to order hanging of a individual who has suffered 16 year’s incarceration, out of which 10 years are in solitary confinement,” the petition concluded.

Bhullar’s mercy petition which was pending since 2003, was rejected by the President in May 2012.

Referring to Bhullar’s condition, former law minister said: “A sentence of death cannot be converted into a bigger punishment by the torture which the convict inevitably goes through during the time he is waiting for his mercy petition to be disposed of.”

Forty-eight–year-old Bhullar’s Canada-based wife, Navneet Kaur, who was present in the court when the bench read out at 11.15 AM two sentences of the operative portion of their verdict, looked dejected and refused to respond to questions from reporters as she left the court premises.

The apex court had reserved its order on April 19 last year on the plea of Bhullar’s family which had filed a petition on his behalf pleading that his capital punishment be commuted to life imprisonment as there has been “inordinate” delay in deciding his mercy plea and he is not mentally sound.

It was submitted that prolonged incarceration of a death row convict awaiting his/her execution amounted to cruelty and violated the fundamental right to life under Article 21 of the Constitution. 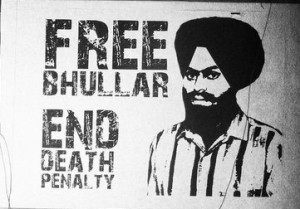 Bhullar was awarded death penalty for the bomb blast that he may not be involved in it. triggering a bomb blast here in September 1993, killing nine people and injuring 25 others, including then Youth Congress president M S Bitta.

The apex court had on March 26, 2002, dismissed Bhullar’s appeal against the death sentence awarded by a trial court in August 2001 and endorsed by the Delhi High Court in 2002.

He had filed a review petition which was also dismissed on December 17, 2002. Bhullar had then moved a curative petition which too had been rejected by the apex court on March 12, 2003.

Bhullar, meanwhile, had filed a mercy petition before the President on January 14, 2003. The President, after a lapse of over eight years, dismissed his mercy plea on May 25, 2011.

SC judgment sentencing him to death was a split verdict

Senior counsel KTS Tulsi contended before the bench that the penalty was not justified as the one of the members of the three-judge bench had acquitted him. Tulsi claimed death can be given in rarest of the rare cases, which means there should not be even one percent doubt. However, if one of the three judges acquits an accused, it means there is 33% doubt and nature of a death sentence is irreversible.

The European Union (EU) has asked India to commute to life the death sentence of terrorist Devender Pal Singh Bhullar, whose clemency petition was rejected by the President, the Rajya Sabha was informed on Wednesday. “EU, in their letter, has inter-alia requested to commute the death sentence of Devender Pal Singh Bhullar to life imprisonment. As a decision in the matter has already been taken, no reply has been sent to EU,” minister of state for home Mullappally Ramachandran said.

‘No Bhullar deportation if we knew of case’

In a high level contact, the German government had informed India it would not have deported death row convict Devinder Pal Singh Bhullar from Frankfurt in 1995, had it known he might face death penalty here. In the details provided under the RTI by the Rashtrapati Bhawan, it has also come to light that there were serious differences of opinion on this issue between the home and external affairs ministries of the UPA government in 2005.

According to file notings provided to RTI activist, Subhash Chandra Agrawal, the President of Germany had raised the issue with the Indian President before Bhullar’s mercy petition was rejected in May this year.

Is Bhullar really a suspect?

“Bhullar was convicted on the sole basis of his confession before the police, which was admissible as evidence under the then special Terrorist & Disruptive Activities Prevention Act (TADA) law, whereas his co-accused, Lahoria, was acquitted by the trial court,” states the review petition. Another twist is that his confession with police was not signed by him but fingerprinted. An engineering graduate and college professor does not know how to sign ?