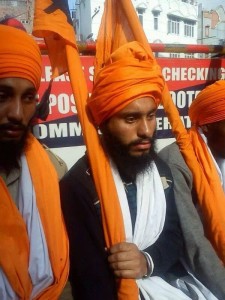 Nishanni Singh whose turban was  deliberately knocked down by Punjab Police officials.

Amritsar, Punjab: A scuffle broke out between members of Sikh bodies and police after the latter prevented them from taking out their proposed march from Akal Takht to Gurdwara Amb Sahib in Mohali to lend support to Gurbaksh Singh, who is sitting on fast unto death for the past 22 days and is seeking release of some Sikh militants lodged in jails across militants, despite having completing their jail terms.

The march was sent off by Akal Takht jathedar Giani Gurbachan Singh after ardas. As activists of various Sikh organizations and their leaders led by “panj pyaras” came out of the Golden Temple, police prevented them from moving ahead and put up barricades. This led to heated arguments between the two groups.

In the melee, turban of a “panj pyara” fell off following which, Sikh leaders became agitated and blamed cops for removing the religious headgear. Additional deputy commissioner of police (ADCP), city, Parampal Singh, apologized before the angry Sikh activists in an attempt to defuse the tension. After the squabble, which lasted for around one and a half hours, cops allowed Sikh groups to go ahead with the march. “We had stopped them keeping in view the law and order situation, cops didn’t remove turban of the panj pyara. We tried to pacify them and even apologized without any fault of ours,” ADCP Parmpal said.

But the agitated Sikh leaders are no mood to let the police go without punishment. “Cops who removed the turban of panj pyara must be identified and punished,” fumed Harpal Singh Cheema, leader of radical Sikh outfit Panch Pardhani.

“By misusing its power to create obstacles for foiling the march, Punjab government has committed a gross mistake. The government has tried to curb socio-religious rights of Sikhs,” said Kanwar Pal Singh, spokesperson of radical organization Dal Khalsa, adding that he was taken into preventive custody by the police on Tuesday night and was released on Wednesday at 2pm, after the march had left Amritsar.

Terming the police action as ‘persecution’ of Sikhs, the president of All India Sikh Students Federation (Peermohammad), Karnail Singh Peermohammad, said, “We will fight for the turban pride. Punjab police have to learn to show respect to the turban of a Sikh.”

Karnail said a meeting of Sikh bodies, including various factions of AISSF,

“If the jailed Sikhs are not released then our youth in all districts of state would be sitting on fast unto death,” he said, while adding that they also wanted the Punjab government to clarify whether it could help them in the issue or they would move to Delhi to seek justice.

Gurbaksh Singh, 47, who belongs to Haryana, has sought release of Lakhvinder Singh, Gurmeet Singh and Shamsher Singh, who have spent 18 years in prison in the case of assassination of former Punjab chief minister Beant Singh. He also demands release of Lal Singh and Gurdeep Singh, lodged in Nabha jail and Karnataka prison, respectively. Akal Takht jathedar Giani Gurbachan said that the government should immediately release Sikhs who had fought for cause of the “panth” by sacrificing precious years of their lives.