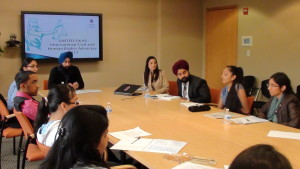 Washington D.C.: Our youths had an amazing opportunity to meet with community leaders for a rare lesson in leadership and advocacy rights on Capitol Hill. The United Sikhs Young Sikh Leaders Workshop (YSLW) provided students of undergraduate universities to gather at our nation’s capitol to build their leadership and advocacy skills. They met with Sikh activists and leaders to learn about issues that affect the Sikh American community and discovered possible actions that may be taken to make a difference in the community.

“The creation of the American Sikh Congressional Caucus and the increase in hate crimes against Sikhs make the need for advocacy on behalf of our community more essential than ever before. We wanted to create a program in which our youth can develop their advocacy skills, learn from important Sikh leaders about leadership and career development, and become knowledgeable on current Sikh issues. Attendees had the chance to do all this and more: they met a successful journalist, congressional advisor, and American Idol contestant while partaking in mock congressional meetings and engaging in important dialogue about bullying in schools. We look forward to the next segment in this workshop series.”, said Anisha Singh, Policy Advocate United Sikhs.

Angad Singh, a young Sikh leader reported; “I did not know what to expect when I signed up for the workshop since I did not have any previous experience working on Sikh issues or doing any kind of advocacy. But I was amazed at how much I learned. I had no idea there were so many cases United Sikhs worked on around the world which resulted in policy change. I also really enjoyed hearing Gurpreet speak about leadership. Since I am a finance major and the skills he discussed will apply to my career.”

Through the workshop, young leaders became aware of social issues, expanded their knowledge on strategic solutions, built relationships and gained mentors with leaders from the community, and developed confidence to advocate for Sikh rights. YSLW 2013 focused on exploring post-9/11 xenophobia and hate crime increases, bias-based bullying among youth, and tools to advocate for change and address misconceptions.