Shaikh Nahyan bin Mubarak Al Nahyan, Minister of Culture, Youth and Community Development, visited the UAE’s first Sikh temple in Dubai, sat down on the carpeted floor with members of the community to listen to prescriptions from the Sikh holy book on how to lead a benevolent life, and won the hearts of the nearly 50,000-strong Sikh community living in the UAE and the diaspora worldwide. 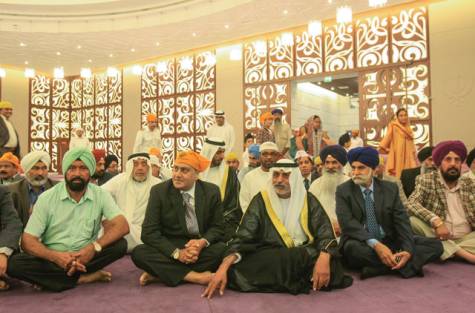 “This is a historical day,” said Surender Singh Kandhari, chairman of the Guru Nanak Darbar, the gurudwara named after the founder of the Sikh religion.

“This is the first visit by a member of the royal family and shows the secularism of Dubai.”

A smiling Shaikh Nahyan inspected the gurudwara that has become a landmark in Jebel Ali since its completion last year, accepted the shiropa, the saffron scarf draped around his neck as a mark of honour, and signed the guest register.

He also made time to speak with the milling guests on Wednesday night, congratulating a beaming Gurpreet Kaur, founder of the Punjabi Global Foundation NGO, who had flown in from Mumbai just to attend the special occasion.

Though Sikhs chipped in to raise the $20 million for the gurudwara themselves, the sprawling land was donated by His Highness Shaikh Mohammed bin Rashid Al Maktoum, Vice-President and Prime Minister of the UAE and Ruler of Dubai.

Shaikh Nahyan likened him to the secular Mughal emperor of India, Akbar, who would reward people on the basis of loyalty and intellect, irrespective of background and religion. “(The gurudwara) is evidence of Shaikh Mohammed’s respect and regard for other religions,” he said.

Dubai, he told the gathering that included businessmen as well as blue-collar workers, is a land of security and stability where people from different ethnic and religious backgrounds worked together for peace and prosperity.

The temple, he hoped, would not remain just a building of concrete and mortar but become a place where people would be able to fulfil their ambitions and strengthen the bond within the community.

The Guru Nanak Darbar, open from 4am to 10.30pm and offering free food — langar — to whoever chooses to walk in, is now a tourist destination as well.

“Sikhs like to visit a gurudwara wherever they are,” said Swaran Singh Sethi, a 64-year-old automobiles part dealer who shuttles between Mumbai and Sharjah for his business.

“The Dubai gurudwara is an achievement for the Sikh community as well as the country.”

Baljit Singh Anand and his wife Ruby came from California to offer their prayers.

“I have been taking photos non-stop,” Ruby Singh said.

“This is bigger than the gurudwaras in the US.”

Besides a place for the community to meet, Guru Nanak Darbar has also been seeing people flocking in to get married there.