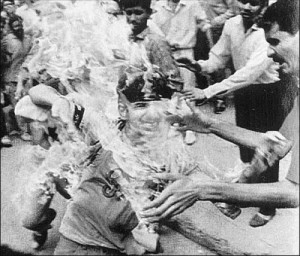 Chandigarh, Punjab: They seek international investigation into the anti-Sikh riots on the basis of “new evidence”. Almost three decades after 3,000 Sikhs were massacred (according to government figures) following the assassination of Prime Minister Indira Gandhi by her  body guards, Sikh groups led by the U.S.-based Sikhs for Justice (SFJ) have petitioned the United Nations Human Rights Council in Geneva seeking specifically an international investigation into the November 1984 riots as well as the Council’s recognition of the killings as ‘genocide’ under Article 2 of the U.N. Convention on Genocide.

The petition was followed by a ‘Justice March’ by hundreds of Sikhs from Europe, Canada and the U.S.

The petition stresses that successive governments in India have deliberately misled the world community into believing that the 1984 killings were ‘riots’ confined to Delhi, when “there is ample evidence to the contrary”.

The petition titled, ‘1984: Yes, it’s genocide’ was filed under 1503 procedure of the United Nations on Friday and carries the required ONE million (10 lakh) signatures from Sikhs across the world. It is spearheaded by the SFJ, several other Sikh human rights NGOs, as well as management committees of Sikh gurudwaras across Europe, America and Canada.

The petition provides “new evidence” aimed at proving that contrary to prevalent belief, the killings of Sikhs had spread to 18 States and 100 cities beyond Delhi. This includes, among other things, official government records that state that 35,000 Sikhs claimed damages for death and injury, out of which 20,000 claims are from Sikhs who were attacked outside Delhi.

Further, the Sikh groups have provided new evidence of the existence of mass graves of 65 Sikhs in Hondh Chillar village of Haryana, discovered in February 2011, a mass cremation site at Pataudi in Haryana, and ruins of Sikh houses and gurudwaras in Gurgaon and West Bengal.

The petition states, “As a planned cover-up, remains of all such sites were cleaned and rebuilt to purge traces of the attacks. The debris and human remains at the newly discovered genocidal sites throughout India as well as the official records of the Indian government are the most specific irrefutable and convincing evidence that killing of Sikhs in November 1984 was ‘genocide’. The new evidence justifies new investigation.”

Stating that Sikhs have exhausted all avenues in seeking justice and redress in India, the Sikh organisations have detailed the 29-year saga of 10 commissions of enquiry into the killings that led nowhere, the relief given by courts to the accused Congress leaders, and the manner in which the Congress party has promoted and given them tickets despite the charges they face.

Describing the commissions of enquiry as “eyewash to offset the demands for justice and accountability,” the petition says that a cursory look at the reports and recommendations of the commissions shows that they are a “hoax played through the façade of investigation into the November 1984 killings” and were aimed at covering up the extent and scale of violence against the Sikhs.

Naming the former MPs, Sajjan Kumar and Jagdish Tytler, Union Minister Kamal Nath, Arjun Singh, HKL Bhagat and Amitabh Bacchan, among others, the petition says the government has “thwarted all attempts by the victims to get justice by cover-ups, destroying evidence and providing immunity to Congress leaders, by threatening witnesses and victims. The victims have no recourse but to approach the UNHRC.”

Speaking to the media from Geneva, Gurpatwant Singh Pannun, the legal adviser of the SFJ, said: “We are overwhelmed at the support that this petition has got from Sikhs across the world. We hope to have a hearing before the U.N. subcommittee on Human Rights, to present evidence and witnesses about the extensive use of government machinery in the violence against Sikhs during November 1984.”

Initiated last year, the petition was also supported by the Akal Takht, the supreme temporal body for Sikhs, which issued an appeal to Sikhs to gather signatures and make it a success.

Camps were held in the five Sikh takhts and at several gurudwaras along with awareness campaigns across social media to collect signatures.