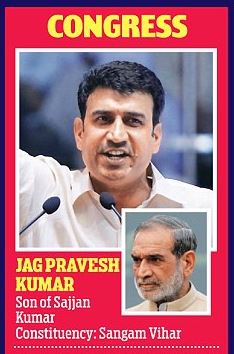 Amritsar, Punjab: Nomination of former Congress MP Sajjan Kumar’s son Jag Parvesh as a candidate in Delhi assembly polls (from Sangam Vihar Colony) may figure in the amended complaint to be filed against Congress president Sonia Gandhi in a pending human rights violation case in a US court on December 3, for which an adjournment was granted by a Eastern District Court of New York on November 18 despite opposition by her counsel.

Sajjan is already facing a criminal case pertaining to November 1984 state sponsored Sikh Genocide. Sikhs For Justice (SFJ) had filed a complaint against her in a US court and summons were issued to her on September 3 when she was still in US for a medical checkup.

“The amended complaint will include Sonia Gandhi’s acts of rewarding those involved in genocidal attacks on Sikhs with political positions. The complaint will also include the recent nomination of Sajjan Kumar’s son as Congress party candidate for Delhi assembly polls. Sajjan Kumar is one of the many Congress (I) leaders who led death squads to kill Sikhs after the death of PM Indira Gandhi,” said SFJ legal advisor Gurpatwant Singh Pannun.

Sajjan Kumar was denied party ticket along with Jagdish Tytler in 2009 parliament election after Congress faced much embarrassment at national level for giving them tickets despite their names repeatedly figuring in the November 1984 cases.

While the rights group claimed that Federal Court summons were served on Sonia Gandhi through hospital and security staff at Memorial Sloan-Kettering Cancer Center in New York on September 9, Sonia’s attorney had challenged the service of summons and had questioned the jurisdiction of the court.

A class action lawsuit was filed by SFJ, a US based human rights group, along with two victims of November 1984 under Alien Tort Claims Act (ATCA) and Torture Victim Protection Act (TVPA). SFJ and victims are seeking compensatory and punitive damages against Congress party president for her role in shielding and protecting Kamal Nath, Sajjan Kumar, Jagdish Tytler and other party leaders from being prosecuted for their crimes against humanity in November 1984.