Sikh Genocide Colony Tilak Vihar Attacked by Indians on India’s Independence Day with the support of Police. Many Sikhs Shot and Wounded

Babu Singh Dukhiya president of Tilak vihar victims informed me by phone that 4-5 sikh youths were just going on their way when all of them they were obstructed by some sweepers of adjacent colony and without any provocation they attacked on Sikh youths as they had some pre-planing similar to 1984. It was a pre-planned attack as they (sweepers) were well equipped with sharp edged weapons called Churis, Knives etc. 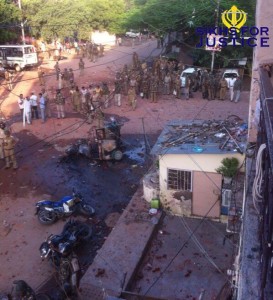 When some elderly Sikhs watched it, they interfered and objected, soon the scuffle was over but in a short time these sweepers gathered in large numbers nearly 100-150 and attacked once again at Gurudwara Sahidganj at Tilak vihar.

It provoked Sikhs as they had already faced 1984 in their life, soon a stiff resistance was made by Sikhs who gathered at once and by collecting anything to fight, they stopped the attack and gave a befitted reply.

At this point Delhi Polcie which was so far a mute spectator entered into scene and fired the tear shells on Sikhs and simultaneously opened fire upon them who were just trying to save their place of worship – their Gurudwara. nearly 5-6 Sikh youths got wounded by bullets. One Sikh was shot in his pelvic region, two sikhs got bullets in their hands, one bullet pierced an ear of Sikh (hardly saved) and another one Sikh received a bullet in his neck. (Babu singh Dukhiya was there with this person when talked to me on phone).

Other Sikhs wounded got injuries due to pelting stones by these sweepers. Police didn’t made any attempt to save the gurudwara but supported the attack and by opening fire upon Sikhs. This is confirmed from Babu singh dukhiya.