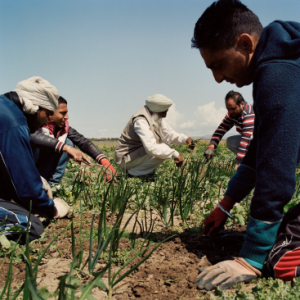 When Ivor Prickett first heard that hundreds of Sikh farmers were moving from northern India to the former Soviet republic of Georgia, all sorts of images came into his head. He had spent time with ethnic Georgians in Abkhazia, a disputed breakaway region, and had trouble picturing Sikhs mixing easily.

“I knew what the old, rusting, ex-Soviet parts of Georgia could look like, so putting these modern Indian farmers into that setting really interested me,” Mr. Prickett said. “I pictured the color of these guys’ turbans against the mottled brown and green opaque landscape that you find in Georgia.”

He decided he wanted to explore the visual and cultural juxtapositions and see how the new farmers were faring.

These latter-day Joads had left their homes because fertile land in northern India was expensive and hard to come by. Hundreds, perhaps thousands, of farmers had moved to Georgia in the last two years in search of land and opportunity. But few knew the language. Some weren’t even sure exactly where it was on a map before they arrived.

Rather than being self-sufficient, Georgia’s leaders have opted to import much of its packaged food. Mr. Prickett found that a lack of skilled manpower and resources, as well as the legacy of Soviet-era collective farming, had left thousands of acres of lying fallow. Land that is planted is worked by subsistence farmers, and the government has looked to immigrants for help. Iranian, Chinese and Indian investors have also tried to buy land.

Most of the Sikhs Mr. Pricket encountered had acquired land in groups of four or five people and were farming together. They seemed, to Mr. Prickett, who is represented by Panos Pictures, surprisingly adept at navigating Georgian society.

“They were perfectly comfortable driving, taking public transport, and even communicating in Kartuli, the main Georgian dialect, which is a very difficult and strange language to master,” he said.

The men tended to stick together in small groups, socializing mostly with each other. Few had been there for more than two years, and most were waiting to see how this experiment worked before putting down roots and sending for their wives and children in India.

Although Mr. Prickett did not witness any problems, there have been reports of resentment of the Sikhs by their ethnic Georgian neighbors. It is not clear whether the new Georgian government will continue to allow outside agricultural investment and migration.

The farmers were, on the whole, “very traditional guys,” Mr. Prickett, 30, said.

“A lot of these guys who were practicing Sikhs, and vegetarians, were used to eating very specific food that they wouldn’t be able to find in Georgia,” he said.

They did their own cooking, grew most of their own vegetables and herbs and brought spices and other foods from India. Some of his subjects weren’t observant, but others had little shrines in their living rooms. The first Sikh temple in Georgia will be under construction soon.

It is not unusual to find large Indian communities in many parts of the world. Some date to 19th-century indentured servitude, particularly in the Caribbean and Africa, others from merchants seeking financial opportunities. In the last 30 years many skilled professionals have migrated to the West and semiskilled workers to the Persian Gulf.

Still, the unusual pairing of Sikhs and Georgia, Joseph Stalin’s birthplace, was fertile ground for Mr. Pickett’s finely tuned storytelling abilities. And it was one of the very few times, he said, that “a story turned out to be pretty close to what I imagined.”

“We’re very good at cooking up these great stories in our head, but when you go and find them they’re not quite what you imagined,” he said. “But this was probably the first time I’d got it right in my head and I wasn’t disappointed.”