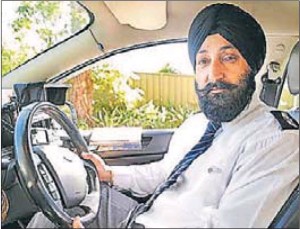 Sydney, Australia: Hardev Singh, a Sikh taxi driver in Sydney (Australia), has been referred to as the “calming cabbie of Epping” for his healing words of wisdom.

However, Hardev insists that his words are just acts of kindness, and all part of his first-class service.

The 50-year-old father of two has gained a fine reputation for passing on words of wisdom during trips across Sydney.

According to the Daily Telegraph, the Northern District Times tracked down Hardev after a letter to the editor from one Nesha O’Neil highlighted the Silver Service driver’s calming ways.

O’Neil said that once she had an absolutely awful day, and was so upset and stressed she preferred not to drive. She boarded a cab which Hardev was driving and let him know she was grumpy and just wanted to play on her smart phone as a distraction. He told her to take a few deep breaths and think of happy things.

O’Neil recalled that Hardev Singh then showed her some photos of Kashmir, where he came from. She said when she got out of the cab half an hour later, he put his hand on her shoulder and told her everything was going to be OK, and to remember the beautiful photos and to breathe.

Hardev dismissed his kind ways as just his chatty nature, and being compassionate and caring for other people.