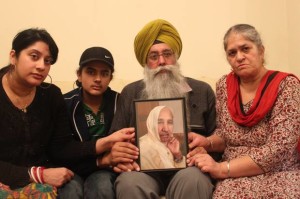 London, UK: A 78-year-old British Sikh woman died after being hit by a speeding police motorcycle in London, officials said today. After a week-long inquest into Harbhajan Kaur’s death, police found that nobody was to blame and described her as a victim of a “tragic accident”.

However, Ms Kaur’s family asked for a fresh investigation into the role of the London police officer, who was seriously injured in the collision.

“This wasn’t an emergency. How can it have been that urgent for the officer to be going that fast? We feel powerless that there hasn’t been a proper investigation,” Kaur’s son Gurmej Singh told the ‘Evening Standard’.

“If it was me, police would have arrested me straight away. My mother has been crossing there every day for 18 years and she only crossed when there was the green man,” added the 61-year-old.

Dismissing chances of any foul play, a Metropolitan Police spokesperson said the incident had been investigated by the Met’s Directorate of Professional Standards and the officer was interviewed.

“A file was handed to the Crown Prosecution Service which made the decision there was insufficient evidence for a realistic prospect of conviction on charges of either death by dangerous or careless driving,” he added.