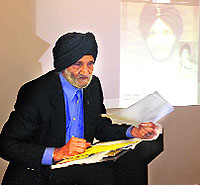 Vancouver, Canada: The memoir of a prominent Sikh World War II veteran, who fought against racism by the Newton Legion, was released in Surrey on Saturday afternoon. Authored by Sharanjit Kaur Sandhra, “A Soldier Remembers’’ is a memoir of 93-year-old former Lt Colonel Pritam Singh Jauhal, who had captured headlines across the world for challenging the racist policy of the Newton Legion in Surrey that barred the entry of turbaned Sikhs inside the club in 1993.

Jauhal and other Sikh war veterans, who had served the British Empire during World War II, were denied entry into the Legion on the occasion of Remembrance Day. The legion officials insisted that they could be allowed in only after removing their turban as rules forbade veterans from entering the club with a headgear.

This was despite the fact that English women were allowed to attend with their berets on, says the book. Jauhal shot into prominence for fighting against this prejudice and became the face of the Sikh struggle against racism in Canada.

He wrote a protest letter to the Newton Legion detailing the sacrifices made by South Asian soldiers during World War II in a bloody fight against the Nazis. He also wrote to the Queen of England who is the constitutional head of Canada. Following the support he received from mainstream allies, including the former British Columbia Minister Penny Priddy, the Legion apologised and amended its policy. Priddy, who was present at the controversial Remembrance Day event, had walked out in protest after the Sikh veterans were not denied entry. She was at the book launch that was organised at Newton Library. In her speech, she acknowledged that this “heroic fight’’ of Jauhal ensured equal rights to the Sikhs in Canada. “He did not accept the status quo’’. An emotional Jauhal hugged her and said he couldn’t have won the fight without her support.

Jauhal also received threat letters and calls from white supremacists for raising the issue. The book reveals how his wife suffered a cardiac arrest and died during those difficult times. His honour was restored when the Legion was relocated to White Rock where he was invited years later to make a speech. He was also given a seat on the podium along with the Legion president.

Jauhal, who walks with a stick, came to the book launch with relatives. His ageing voice cracking, he read out from the book prologue and recalled how racists would call him names and taunt him saying “Paki go back’’ when he migrated to Canada in 1980. He received a standing ovation. A few among the audience even raised religious slogans.