Delhi, India: The Delhi Sikh Gurdwara Management Committee has complained to the Chief Election Commissioner against Congress Vice-President Rahul Gandhi for allegedly hurting Sikh sentiments with his remarks on the killing of his grandmother and father.

DSGMC president Manjit Singh GK, who is also chief of Shiromani Akali Dal (Badal), has asked the CEC to take action against Gandhi as per provisions of the Representation of the People Act, 1951, alleging that he has violated the model code of conduct.

“Shiromani Akali Dal (Badal) is extremely pained and anguished to read the speech delivered by Congress Vice- President Rahul Gandhi in his election rally on October 23 at Churu in Rajasthan in which he has stated his grandmother was killed, his father was assassinated and perhaps he may also be killed one day,” DSGMC president Manjit Singh GK said in a letter to the EC.

“The speech by Rahul Gandhi not only violates election code of conduct, but also hurts sentiments of the Sikh community,” he said.

“While delivering such anti-Sikh and communal speech, he has reopened and refreshed old wounds of anti-Sikh carnage of 1984,” DSGMC general secretary Manjinder Singh Sirsa alleged.

Shiromani Akali Dal (Badal) vehemently disapproves of the speech and requests that strict action be taken against Gandhi, the DSGMC president said in the letter. 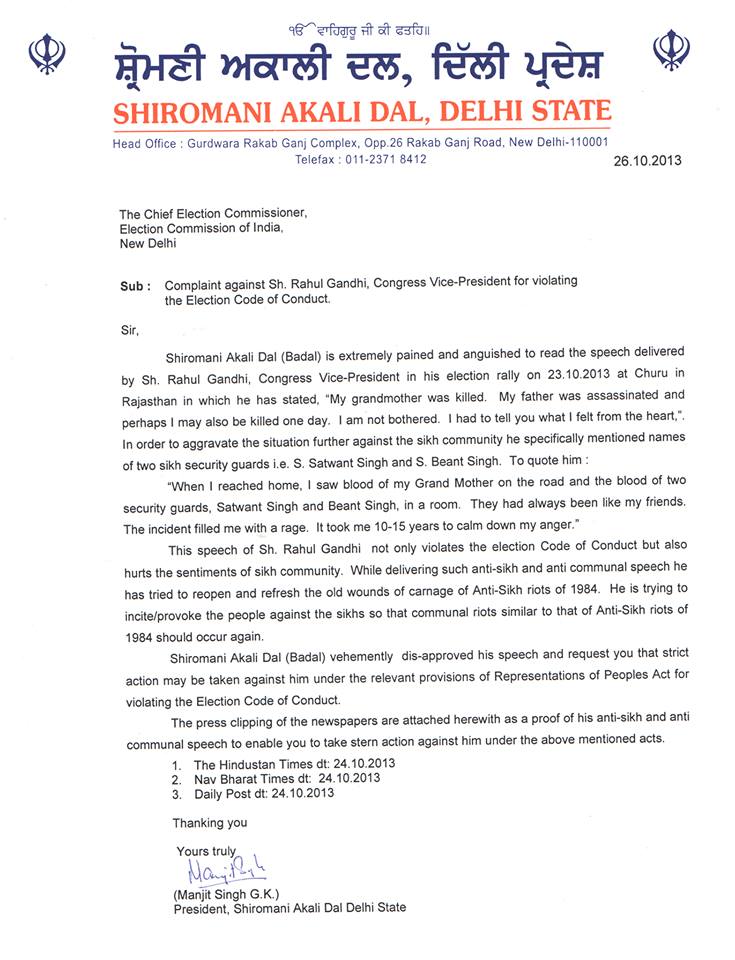