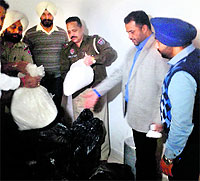 Chahal’s factories, including Montek Bio-Pharma Limited and MBP Pharmaceuticals Limited in Baddi, and Tulip Formulations at Damtal, near Pathankot, have been sealed and search is on.

The chemicals seized were enough to manufacture “ice” or crystal methamphetamine worth Rs 2,000 crore in the international market. The police is now looking into financial dealings and money invested by the alleged drug smugglers through politicians both in India and abroad. Investigating officer Bikramjit Singh Brar told the TNS over the phone that their teams had barely completed 50 per cent of the search in one of the Baddi units and the recoveries could be worth over Rs 1,000 crore.

“The recoveries may go up manifold but nothing can be said till the search of the two units is complete,” he said.

Investigations suggest Chahal was supplying chemicals to Bhola, while Bittu Aulakh, who allegedly had close links with an MLA, facilitated safe passage of the contraband. Aulakh is allegedly linked to senior police officers and top politicians of the area.

The role of two senior police officers is under the scanner for their alleged proximity to Chahal and Aulakh.

“We are investigating if the political leaders whose rallies and functions these two accused sponsored or the police officers to whom they talked regularly knew about their operations,” a police officer said.

The names of two alleged middlemen – Raja Rudrapur and Laddi – from Amritsar have also surfaced during Chahal and Aulakh’s interrogation. Both are in police remand till November 22.

“The two suspects acted as middlemen and even helped transport the drug. Police teams are trying to arrest them. Both had humble beginnings but made crores of rupees within a few years of allegedly coming in touch with Bhola and others,” claimed a policeman.

Patiala Senior Superintendent of Police HS Mann said the recovered drugs worth Rs 600 crore were just a tip of the iceberg.

“We have searched just one part of the factory,” he said, adding that the factory staff was questioned to ascertain the role of chemical analysts who helped prepare the drug.

The police will summon six security guards, including two of the Punjab Police, attached with Youth SAD leader Maninder Singh Aulakh to ascertain their role in facilitating safe passage of drugs. The gunmen used to travel with Aulakh and his touts who acted as couriers in the racket, a police officer claimed Aulakh got the two official gunmen through court after claiming threat to his life. The four others were private bouncers who often dressed up as policemen

Arrested middleman Bittu Aulakh used to attend SAD rallies regularly. A senior police officer claimed the name of a senior politician from Amritsar had cropped up during his interrogation. “Aulakh claimed he was in constant touch with senior politicians,” the officer said.